The astrology of pilot and murderer Andreas Lubitz 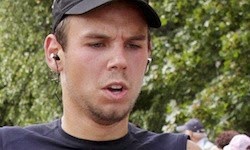 Andreas Lubitz is the German born co-pilot who flew German Wings flight 9525 into the French Alps killing himself and 150 others aboard on March 24, 2015.

He was born with a stellium of planets in his first house in Sagittarius,  that include the Sun, Saturn, Mercury and Uranus and this gives him a type of natural arrogance and self assurance.

Mercury-Saturn (22-23 degrees Sagittarius) could give him critical thinking abilities, but could also lend itself toward negative thinking and depression.

Sun-Saturn transits can give a serious and responsible side to the personality but this is a difficult transit and can indicate early conflict with the Father, and puts a major damper on his self confidence.

Sun-Uranus transits indicate a rebel and this is opposed by his natal Chiron at 27 degrees of Gemini. Chiron is the asteroid known as the 'wounded healer,' and in this position can give a sense of something that is crippling. As Chiron is considered the wounded healer it would be imperative that he work through his pain and come out the other side to ever attain any degree of personal satisfaction in life.

The Sun opposing Chiron shows the following traits according to astrologer Liz Greene:
The Sun working against Chiron
Depression
Loss of confidence
Sense of permanent damage
Cynicism
Expectation of failure
Sense of victimization or scapegoating
Desire to victimize or scapegoat others
Projection of inferiority on others
Loss of the will to live

Chiron also squared his North Node at 27 Pisces, which shows our life purpose and lessons. Celeste Teal wrote about nodal aspects to Chiron: "They play the role of the wounded victim, the wounded healer, teacher, initiator, or the one who wounds. There is often some personal wounding that must be embraced, expanding personal consciousness, and using the understanding to help others." "Sometimes the personal wounding experience has a distorted effect in which the hurt and suffering they ultimately bring others far outweighs and good they do. Hitler had this aspect."

Uranus on one side of his Sun would make him desire freedom, spontaneity and a desire to break free and live life on his own terms. Saturn on the other hand, would weigh him down with insecurity which no doubt began in his childhood with his earliest relationships. He was likely crippled by these two extremes in thinking and feeling throughout his life.

Looking at his chart from his Sun,  his Moon is in Scorpio, along with Mars and Pluto, falling in the 12th house. The combination of this second stellium in his twelfth house would be considered very unfortunate, and karmic. This combination would make him an intensely private and secretive individual.

Wild horses could not drag out of him something he did not want to discuss, thus the fact that no one knew of his depressive issues, and he led a secretive personal life.

This shows a life with many struggles and relationship issues with women would be at the top of his issues. Mars-Moon combinations, especially in Scorpio, and in a man's chart, and show a personality that is frequently upset, overly intense, jealous and possessive and might never have a peaceful domestic life.

Add to the picture Pluto and you have a very difficult personality type as well. As a matter of fact this combination can show a 'killer instinct," type of individual, but the opposite side of this instinct is control. These individuals must learn that monsters live within, not on the outside and the key to survival is to control the monsters within. In the 12th house, it is likely he carried rage and anger all of his life and Pluto in Scorpio can be vindictive as well.

His sex life would have been a psychiatrist's notebook within itself.

Mars-Pluto combinations indicate rage, potential violence, vindictiveness, and a person who is continually struggling in life, and can at times have the potential to do violence to themselves or others. (or have it done to them).

This combination  can show a ruthless personality and a desire for control of others. That's not to say however that all of these individuals become violent. Most learn to curb their tendencies and use control and self-mastery.

His relationships with women, and this includes his earliest ones, would have been be volatile, manipulative and difficult at best. There was likely some type of abuse be it emotional, physical or both.

He would have experienced disapproval from his Father, or at least perceived it that way, thus setting the stage for things to come.

I would like to point out however, there are plenty of people walking around with these planets and worse, who don't kill 150 other people, who are looking to him as a figure who will see to their personal welfare. Many people have difficult parental relationships and don't kill the people they are sworn to protect.

2014 was a pivotal year for Lubitz, as Saturn in Scorpio conjuncted his Mars, Pluto and Moon. His relationship problems would have worsened and he would have experienced a great deal of depression and inner rage.

He was reported to have broken up with his girlfriend around the first part of this year. The Uranus-Pluto square fell on his Jupiter around that time, setting off this powerful planetary connection in his chart which was bound to create turmoil and change.

It is ironic that the crash of the plane and the death of 150 plus people would become part of the events of the Uranus-Pluto square of March 2015, and it is reported that he told a former girlfriend that, 'someday he would do something famous to make people remember him." This isn't the first time we have heard these comments from a mass murderer. (or seen these planetary combinations).

I have no doubt that Lubitz experienced mental issues, but I don't see his as being insane.

Had things been different somehow he would have learned to work through the pain, and control his inner urges. He would have learned that his own inner darkness would always be there, but it could be controlled, and he could have helped others. Scorpio planets generally gravitate to the light, or to the darkness. Which such a heavy combination, there is really nothing in between.