The spirit of America rises with Houston 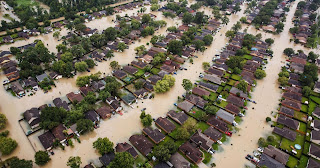 Rescue teams, the military and civilian volunteers are out in full force doing what they can to rescue those trapped by the flood waters from Hurricane Harvey, and they continue even in the face of potentially more disastrous weather, possible explosions and contamination.

Businesses alone have donated 72 million dollars to relief funding to date, and this does not include individual donations.

The Cajun Navy, a group of volunteers from Louisiana has made headlines, rescuing flood victims. There is no doubt it will take time, even years, for Houston and surrounding areas to recover, but it will happen.

Looking at Houston's astrological chart (8-24-1836 12:38PM) the storm/flood is denoted by transit Neptune opposing Mercury from the fourth to the 10th houses. The fourth house shows home and foundation, Neptune rules water, especially sea water. Neptune lies on the cusp of the fourth house which also shows significant change. The storm struck just one day after Houston's astrological birthday. The people of the area will be disoriented and confused for a while but clarity along with rebuilding will return.

Transit Pluto is square Pluto from the second (money) to the fifth houses (fifth house rules entertainment venues/young people) This shows destruction that will cost a great deal, issues that will affect young people, and ultimately rebuilding, as Pluto can ruthlessly destroy and then rebuild in a stronger way.

Uranus is square Venus in the 8th house of money and other people's money showing a financial crisis and issues that can especially affect women through early next year.

Houston is prone to costly water related events due to natal Neptune conjunct the Moon falling in the second (money) and third (neighborhoods/infrastructure) houses.


Houston was 'born' with a grand trine in water, a 'lucky transit.'   The trine involves Saturn (1 degree of Scorpio in the 11th house), Uranus (2 degrees Pisces in the third house), and Mars (3 degrees of Cancer in the 8th house). October 10, Jupiter enters Scorpio and will 'set off' the grand water trine, and by this point we should be able to see some concrete results if not additional funding activities as Houston strives to rebuild.

The epic 1,000 year flood in Houston is shown in the US (Sibley) natal chart on August 25, in the form of a t-square involving Uranus, Pluto and Venus.

Saturn is also opposing Mars (Frustration, anger) in the US chart and Saturn squares Neptune. This becomes part of the aspects involving the flood in the US chart, but these transits denote other things as well.

Jupiter denotes generosity, and as Jupiter is trine the US natal moon at 27 degrees of Aquarius, I expect Americans to continue come together to support the neighborhoods and people of Houston and surrounding areas in Texas that have been destroyed.

The powerful August 21, eclipse at 29 degrees of Leo fell in the US chart 9th house opposing the Moon in the third house of neighborhoods. This shows an upset population, and issues among neighborhoods and infrastructure. An eclipse at 29 degrees is considered a 'critical degree,' which can relate to endings of all sorts. Houston will be rebuilt, but it will never be the same.  Eclipses are known for being a harbinger to disasters, earthquakes, and earth related events.

As an eclipse occurred at the same degree August 21, 1998. At that time we saw extreme weather events and flooding in China, and Hurricane Gorges brought significant flooding to Florida. Floods and landslides occurred in India, Bangladesh, and  Clark Country, Nevada, and extensive damage was wrought by Hurricane Isis.

From Charlie Daniels, In America