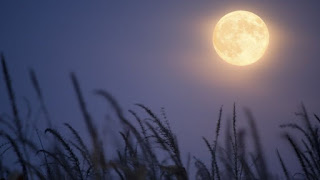 Hang on cosmic companions, this is going to be quite a full moon and the last full moon of the summer.

This moon will fall at 23 degrees of Pisces and is called the Harvest Moon, which comes from the time farmers start gathering in crops to prepare for winter. In days of old they used the bright light of the full moon to extend the working day, thus the 'Harvest' moon.

The sign Pisces is the last sign of the zodiac and associated with endings and 12th house matters. This house rules karma, places of seclusion, hospitals and endings. If something ends for you, then it is simply it's time, and the issue would have been problematic for some time now. This can include jobs, relationships, friendships or any other matter and it does not have to represent a major loss. It can be as simple as the end of a certain attitude or outlook, or as major as a significant relationship, depending on what else in your personal chart.

Pisces is the sign ruled by Neptune, the planet of illusion, delusion and confusion. Pisces is represented by two fish swimming in opposite directions. On one hand, Pisces often represents lies and deception, self deception, confusion, lack of clarity, alcohol and drug abuse, corruption and the seamy side of life. The opposite side of this sign represents spirituality, compassion, psychics and psychic abilities, creativity, and the ability to soar to the highest levels. My recommendation is to tap into this energy if you can and use the time to focus on your own personal dreams and aspirations as they may become more obvious during this moon. Don't be surprised if you don't actually have vivid dreams or intuitive experiences around the full moon.

This Moon conjuncts Neptune. Neptune is in Pisces and is the most psychic of placements and represents the dawn of a new spiritual awareness and understanding. The last time Neptune was in the sign the spiritualist movement began in the late 1840's. But it also represents displaced and disenfranchised people around the world as we have seen in the last number of years as those before us experienced before the US Civil War when Neptune was last in Pisces (1849-1862). We may see and hear of such people at this time, and this issue will keep coming back up until humanity deals with it, and now is the time. Many people are suffering throughout the world on both a global and personal level.

Neptune represents both true spirituality and religion (of all types including groups like ISIS), and we will see and hear of events and situations connected to spirituality, religion and ideologies.

Moon-Neptune can take us to the Moon and back, or it can send us spiraling down a rabbit hole of discouragement, self-doubt, confusion and emotional pain. These are the two poles the placement will swing between.

Mars opposes Neptune and this becomes part of this full moon energy. Again, as Neptune is involved there are several directions this energy can go. It can represent either compassion, creativity and spiritual pursuits, or it can be a negative, tiring and discouraging energy full of pitfalls, paranoia and self defeated thinking or substance abuse. Neptune transits can also reveal previously unknown information.

Mars-Neptune is a potentially volatile transit in the world and Mars rules police action, violence, guns and war.
This full moon is the companion to the last new moon in Virgo that fell on August 30. That moon opposed Neptune and Neptune rules water, salt water specifically. We saw the destruction of the Bahamas at that time due to hurricane Dorian. Supermoons are often associated with disastrous weather or earth related conditions. While this is not a supermoon we could once again see water related weather conditions, issues with oceans or people dealing with conditions left by hurricane Dorian.

This moon also opposes Mars (anger, activity, frustration, men) and Venus. With Venus the focus is typically on personal values, beauty and relationships.

This Moon stands out in the US natal chart and there will be issues concerning foreign countries. Extreme ideologies can become issues front and center and confusion, lies and lack of clarity will abound in the population as this moon opposes Neptune in the US chart. Neptune rules oil and oil producing countries, and the 9th house also refers to law and the courts.