US-Cuba relations and the future 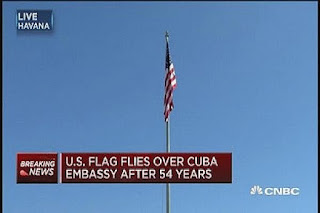 There are others I have known and wish had lived to see this day; one who barely escaped Castro's gunmen, and was put on Castro's hit list. He lost all he had built here because he was American and bought jobs and companies to this Caribbean Island that would be forever changed after Castro took power.

Of course, those foreigners who had businesses in Cuba lost their investments and some their lives, but those who lost the most were the Cuban people themselves, who were subjected to decades of tyranny, loss and poverty due to the embargo imposed by the US after Fidel Castro claimed power.

But, as of now things are changing and we have a chart that shows this monumental shift that has been more than a half a century in the making,  along with the great opportunity for new Cuban-American relations.

This chart has an 8 degree Libra ascendant, and Libra is ruled by Venus, which falls at 23 Leo (retrograde) in the 11th house of institutions that are ruled by the government, and long range hopes and expectations. The Sun and Moon lie next to Venus at 23 Leo, and these planets trine (trines are good) Uranus in the 7th house.

The seventh house shows relations with other countries, relations, treaties, and alliances. This shows the desire and good chance for an exciting new relationship.

The raising of the flag occurred almost exactly on the New Moon in Leo (within minutes) and the Sun and Moon (21 degrees Leo) trine Uranus. The moon rules the mood of the people and this shows a new and exciting connection between the people of both countries and high hopes for a new friendship.

Venus at 23 degrees of Leo however,  squares Saturn with a 5 degree orb (along with the Sun and Moon) and this shows tension over money and values. According to Celeste Teal, an afflicted Venus may indicate cultural or artistic suppression, or censure.

Hence, Fidel Castro's proclamation on the same day, the US owes Cuba a great deal of money due to the embargo. But, the trine to Uranus should help greatly this square. (squares are difficult)

The tenth house shows the government, and Mars falls here at 3 degrees of Leo and is unaspected.  Mars shows a governing party or individual who is aggressive, and flamboyant in nature and Mars rules war/the military. Astrologer Veres Zoltan wrote, "an unaspected planet often displays a lack of integration into the conscious personality and often promotes the energy of the sign it occupies" In this case the sign is Leo, which is associated with royalty (or perceived royalty), flashiness and aggressiveness, and this describes the government and its leader.

Dane Rudlyar wrote that an unaspected planet brings about more freedom (of the government and leader) with all its potential danger as well as qualities and forces. Thus, the unaspected planet can unleash full power without limitation or control.

As Mars is so close to the 12th house cusp, it appears the leader of the government wishes to escape the responsibilities of governing and disappear into private life of some sort.

When I saw this I did further research and it appears General Raul Castro will leave after his second term.  "Despite his reputation as a dedicated communist, since assuming leadership of Cuba, Raúl Castro has implemented numerous social, economic and political reforms, including the lifting of restrictions on commerce and travel for its citizens, allowing for the privatization of portions of military and government infrastructure and opening the country to foreign investment. In 2011 Raúl also instituted a two-term limit for the office of president, and when he was reelected in 2013, he announced his plans to leave politics at the end of his second term." -from Bio.

Saturn falls at 28 degrees of Scorpio in the second house, which shows us limited financial resources. As Mars is the natural ruler of Scorpio and Mars lies in the 10th house this shows us a leader who controls or has control of much of the public wealth.

It appears there are many things that are hidden from public view and all may not be as it publicly appears.  Lies may be told relating to relations with the US and many will be suspicious on both sides and there may be secret alliances.

Neptune in the fifth house is also retrograde, and while the fifth house rules youth and entertainment, Neptune rules social and political movements, collective values, Utopian ideas and the average person. It has to do with the conditions of the disadvantaged, especially youth-5th house.

Neptune rules drugs and tobacco, alcohol, photography, oil, gas, petroleum, and the oceans. An afflicted Neptune may indicate political instability and collapse, elements of distortion, fraud or corruption, and as Neptune opposes Mercury in the 12th many things and situations will be hidden.

As the fifth house rules entertainment and Neptune rules alcohol (and prostitution among other things), the potential exists for casinos and other businesses of this type to come back at some point as Americans flocked to the Havana in the 1950's. In the 1950's organized crime played a large role in Cuba's casinos.

Jupiter also opposes Neptune in the 5th house (0 Virgo) and this combination also relates to casinos, alcohol,  movies and fantasy types of entertainment experiences. This can be construed as religion playing a major role in society as well.

It also shows the potential for unrealistic expectations.

On July 23, (2015) a GOP-controlled Senate panel has voted to lift a decades-long ban on travel to Cuba, giving a boost to President Barack Obama's moves to ease travel restrictions and open up relations with the Castro-governed nation.

Here is hoping for the best!
Posted by Leslie Hale at 1:24 PM