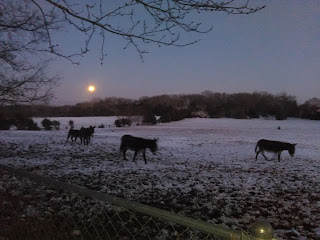 February is the second month all planets are direct-no retrogrades. Make use of this time as it is rare to have a long period with no retrogrades. These are full steam ahead days, and time to implement your plans and move forward with fewer delays and obstacles. Jupiter the planet of expansion and money turns retrograde March 9, breaking the spell. Of course this doesn't mean you can't move forward then, but the direct beneficial rays of Jupiter won't be as powerful as they are now.

The fast moving planets move through Aquarius, then Pisces in February. Mars remains in Sagittarius all month.

Jupiter peaks at 23 degrees of Scorpio on March 26, where it will remain through March 21. At this point it will start to move backward reaching 13 degrees where it will once again turn direct on July 10. If Jupiter turns direct on a personal planet in your chart you can expect positive results.

If you have water or earth planets (in your personal chart)at 22-24 degrees, Jupiter's sextile or trine should be quite beneficial in some way later this month and into March. Jupiter will remain in Scorpio until November 8.
Jupiter in Scorpio will be financially beneficial to some as it rules the 8th house of other people's money. The 8th house also rules sex. I expect to continue to see the #MeeToo movement go forward. Jupiter in the placement has finally helped to bring to light the sexual abuse young female Olympians endured at the hands of Dr. Larry Nassar. Jupiter's 8th house connection may leave a long needed legacy in society this time relating to the age old problem of sex, abuse and power.

The second eclipse of the year, a solar eclipse, occurs February 15, and falls at 27 degrees of Aquarius, peaking at 4:05 PM, EST. This eclipse cannot be seen in the US.

We last experienced an eclipse at this degree February 16, 1999. If you can remember this time, you may have a clue as to how this eclipse will affect you.


This eclipse cannot be seen in the US, and you can click here to see an eclipse map.

Aquarius rules the 11th house of the collective, friends, hope and wishes and it is here on some level we will be focused.

Eclipses are like wildcards, and one of the ways we learn how and what we need to change and evolve. An eclipse can seem good or bad, depending on what it aspects in your personal chart, and often an eclipse is dramatic, or reveals important information if it aspects a significant point in your own chart/life.  An eclipse often brings news pertaining to life's biggest events. The energy of an eclipse can go for months and in some cases years.
With an eclipse we have both endings and beginnings. A solar eclipse is more like a new beginning, and it is always a new moon. A lunar eclipse can being more news of endings and it is associated with a full moon.
Almost always unexpected information comes to light and at this time something may be eclipsed completely out of your life, or into your life. Eclipses can bring positive or negative events depending on what it aspects in your personal chart.
Aquarius is ruled by Saturn and Uranus. With Uranus involved, unexpected information is often revealed, suddenly.
Mars square Neptune will color this eclipse, and this transit is confusing, convoluted and many people may feel tired and discouraged, if not angry.
You could feel like giving up on something, but don't as this energy will soon pass. With Mars-Neptune transits previously unknown things and situations can be revealed.
The best use of this energy is some type of spiritual or creative activity. Compassion can be given or received.
Of course this will play out in the world. We can see water related weather conditions, unclear situations, chemical weapons or gasses, lies and deception. Judge things carefully-all may not be what it appears.
One of the most noticeable facts about February is there is no full moon. This can only happen in February once about every 20 years. In this case the preceding January or December and the following March or April have two new moons. The next full Moon will occur however on March 1, at 11 degrees of Virgo.
Other transits in February:
February 3-Mercury sextiles Mars. Mentally energetic with an increase in communication-basically positive.
February 4-Venus squares Jupiter. Basically positive but things can be overdone. You could over eat or get overly emotional about something.
February 6-Venus sextiles Uranus. Good for love, your social life and business-positive.
February 10-Venus enters Pisces. Romance becomes more compassionate and sensitive. In many ways this is a far more romantic sign than Aquarius. Excellent for water signs.
February 10-The sun square Jupiter, Many things can be blown out of proportion, and some may overreact. But it is not typically considered negative.
February 13, Mercury squares Jupiter-Our minds move quickly and beyond normal boundaries. You could take on more than you can really do and things may be blown out of proportion, including dietary matters. Not typically considered negative. Also on February 13, the Sun sextiles Uranus. This is positive and thought may come with rapid speed. You could stretch your normal boundaries-positive.
February 15-Mercury sextiles Uranus-Look at things from a new perspective. Positive for communication.
February 16-Mars squares Neptune-This transit colored the energy of the solar eclipse and we can see further events play out at this time. Mars-Neptune transits are often tiring, negative and misleading. Keep your ego out of the equation as Mars and Neptune clash-negative.
Also, the Sun conjuncts Mercury and this is typically a willful, ego driven transit.
February 17-Mercury enters Pisces-Mercurial energy changes again as the planet of speech and communication enters the sign ruling the 12th house. Communication may be less clear, and you need to clarify your intentions. What's left unsaid can be the problem.
February 18-The Sun enters Pisces. Pisces rules the 12th house of the zodiac and can have to do with endings. Pisces is softer than Aquarius. We are now in the Pisces season. Next stop: Spring/Aries!
February 21-Mercury conjuncts Neptune-This can be a creative and psychic transit and dreams can be vivid. It can also be tiring, negative and misleading. It is indicative of water related conditions-negative
Also Mercury sextiles Saturn and this is positive for getting things done. Time to get down to work and responsibilities-positive.
February 25-Venus squares Mars This can indicate jealousy and trouble through the sexes. Drama can rule the day-negative.
Mercury conjuncts Neptune-This will add confusion to the mix, and you may not be clear on facts and things can seem discouraging-negative.
This Sun sextiles Saturn which is about business and responsibilities. It could lend some much needed stability to the other two transits-positive.
February 27-Venus sextiles Pluto-feelings will be deep and not superficial. Some things normally not discussed could come out in the open in a fairly easy manner-positive.
February 28-Mercury squares Mars-This is prone to arguments, accidents and general frustration-negative
Mercury sextiles Venus lending more optimism and better ability to communication lending help to the above transit-positive.