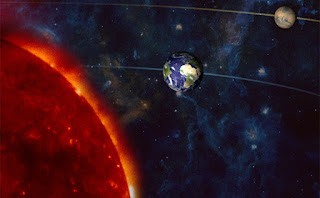 We began the month of June with a beautiful grand water trine in the sky on June 1, that should bring something positive for everyone. Of course, this works best for Water signs who have planets at 15-17 degrees in their personal charts. It can work well for earth signs with planets at those same degrees, but to some extent we should all receive some benefit, in some way.

Mars has already entered the shadow period of its retrograde (since May 14), that occurs on June 26. It will retrograde at 9 degrees of Aquarius and will not turn direct until August 27, at 28 degrees of Capricorn.
Mars retrograde periods occur about every two years and can bring frustration, delays, increased chances of accidents and illness, and Mars rules men, anger, and violence. There can be subtle hidden forms of manipulation occurring as opposes to open conflicts, and people may feel more aggravated. Rashness and impulsiveness must be guarded against. If Mars sets off a natal aspect in your chart during this time,  you should be careful of the way energy is expended.

Mars is in Aquarius rules the 11th house of the collective and groups, as well as our hopes and wishes, and it is here, changes and issues may arise. At the time of this post, Mars in its shadow period is having a significant affect.

On August 14, Mars retrogrades back into Capricorn, ruler of the 10th house of business and priorities, where it will spend the rest of the retrograde period. Mars was in Capricorn March 18-May 15, and we could see some repeated themes that occurred then.

Mars turns stationary direct at 28 degrees of Capricorn August 27, and will remain in the last two degrees of Capricorn until September 12, when it enters Aquarius once again. From there we will repeat the entire cycle of Aquarius that will not change until November 15, when Mars finally moves into Pisces.

While in Aquarius, Mars will make some significant aspects.

On May 16, Mars originally entered Aquarius and clashed with Uranus as it entered that sign a day earlier. Over the next week, we saw many unexpected and volatile events in the world such as the volcanic eruption in Hawaii, a plane crash, and many more changes in the ongoing political battle in the US. Many changes occurred in individual lives, especially those with fixed planets (Taurus, Leo, Scorpio) at 0-2 degrees.

This volatile aspect will return with retrograde Mars at 2 degrees,  August 1-4, and again at 1 degree of Aquarius/Taurus on September 16-19. We can expect volatile events in the world and change in our personal lives if this aspects fixed planets at 0-2 degrees in your personal chart. If this aspected your chart then, it will do so again.

With a retrograde Mars, it is time to step back, slow down and access the situation rather than proceed full steam ahead. By the end of June, 5 planets are retrograde: Pluto, Neptune, Saturn, Jupiter and Mars.

We can't go full steam ahead every day of our lives. Sometimes we have to back up and take a look at where we are, and make changes. Sometimes less can be more, and there is nothing negative about this, it is simply part of the natural cycle of life. Summer this year should be a time of reflection, stepping back to see  our lives clearly and planning for the future.

Now for a look at the other transits during June:
June 5, the Sun conjuncts Mercury and Venus opposes Pluto. Sun-Mercury can mean willful action and egos, and Venus opposing Pluto can relate to personal issues around money, values and love. Some people are going to feel loss, rejection, pain and overly intense or obsessive at this time, and some relationships will end.
June 6, Mercury squares Neptune. This is a confusing and tiring transit prone to misunderstandings, miscommunications, or even lies at worst. Some people may speak without thinking. Some things may be revealed and we could experience water weather related conditions in some areas. Use caution driving as some drivers may be confused or not paying attention. Dreams may be vivid.
June 7, the Sun squares Neptune. This is much like the above transit, and confusion may be rampant. Compassion may be given or received.
June 12, Mercury leaves Gemini and enters Cancer. Thinking and speech will become more emotionally based at this time as opposed to logical, as it is in Gemini.
June 13, the New Moon falls at 22 degrees of Gemini, the sign ruling the third house of communication and speech, immediate family members and surroundings. Gemini is an intellectual sign ruled by Mercury and new ideas may come to the fore. Mercury sextiles Uranus, emphasizing the power of speech and through and urging us toward new or novel ideas.
Venus enters Leo the sign ruling the 5th house of children, friends and entertainment. The weather is warm now, and it is time for some summer fun and romance with Venus in this sign.
June 14, Venus squares Uranus. This can be an unpredictable (Uranus) transit as Uranus can go either way. Things may be changeable, cancelled, or you could alternatively have an electric and exciting day.
June 15, Mercury opposes Saturn. This is a heavy, tiring and somewhat negative aspect. Communication, thinking and speech may be heavy and overly critical.
June 18, Neptune turns stationary retrograde at 16 degrees of Pisces. This will bring about more acute sensitivity on an inner level and we may be able to pick up on those things we don't perceive when Neptune is direct. We are more likely to be listening to our own inner voice during this time and creativity and psychic or intuitive abilities may be increased during this time. As Neptune turns stationary retrograde things could get more confusing for a time.

If transiting Neptune aspects a personal planet in your chart, during this period we tend to become self deluding, depressed, or overly idealistic. Others may deceive us as well. It is important to be as grounded as possible during these times if you are experiencing a Neptune transit like this, especially a harsh one. Neptune transits can go on for several years and if ever your feet need to be planted on firm soil it is now if you have such an aspect.
Hard Neptune transits often coincide with over idealized relationships, or relationships with those who are really not available for a variety of reasons. We may feel we have met our soul mate or the most perfect partner in the world to wake up and find things were not as we had believed, or been led to believe which leads to discouragement, depression and disenchantment.
Often when Neptune retrogrades we find out that our dreams are not based on reality and this generally occurs during the retrograde of a harsh transit in our charts. This can not only affect relationships but many other areas of our lives depending on what area of the chart Neptune is transiting. If you do not have a hard Neptune aspect, you need not be as concerned .
Neptune rules illusion, delusion and confusion and is often the most misunderstood planet. It operates on a deep psychic level in our lives.
Neptune is generally retrograde six months out of every year.

June 19, Mercury trines Jupiter. This is generally optimistic, upbeat and good for business/money.
June 20, Mercury trines Neptune. This transit can increase creativity, compassion and understanding of others.
June 21, the Sun enters Cancer. This is the Summer solstice, and summer is officially here, as the Sun enters Cancer!
Also, Venus opposes Mars on this day. The male and female planets are in opposition and this can cause friction, upheaval, jealousy and lack of understanding between the sexes. Money issues can come to the fore and this transit will play out in the world as well.
June 23, Sun sextiles Uranus. This is positive and prone to new ideas and situations,
Also, Mercury opposes Pluto. This is a transit par excellence of propaganda. This transit is prone to obsessive thinking, arguments and conflict, and getting to the bottom of situations one way or another. Accidents can occur, and we could see violence or volatile situations in the world.
June 25, Venus squares Jupiter. This is typically a pleasant if not lethargic transit, prone to over indulgence.
June 26, Mars turns stationary retrograde at 5:05 PM, EST
June 27, This month's full moon occurs at 6 degrees of Capricorn. Capricorn rules the 10th house of business and priorities. As Capricorn is ruled by Saturn, responsibilities will be on the front burner. The Sun opposes Saturn on this moon, and there is nothing light about this transit. Some situations will come to an end. This will be a serious, if not depressing day in the world.
June 29, Mercury enters Leo. Mercurial energy changes again, becoming less emotional and much more dramatic.
June 30, Mercury squares Uranus. This is prone to changeability and sudden and unexpected news. Use caution while driving. Uranus rules aircraft, the internet, and the unexpected.