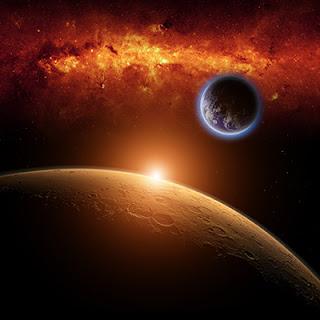 Mars finally enters Taurus January 7th after a long 6 month stay in Aries. Mars in Aries has inspired a great deal of anger and aggravation, especially as it has clashed with Pluto, Jupiter and Saturn on multiple occasions. Mars is the planet that rules our actions, sex lives and anger and it will remain in Taurus until March 4th.

Mars in Taurus will be considerably different from Mars in Aries. Taurus is an earth sign ruled by the planet Venus, so our energies and action will change considerably but this does not mean we aren’t still going to see periods of anger and volatility in January. Planet Venus not only rules love and money, but our values as well, and it is likely we will see many conflicts over what we value and how we approach our personal and collective values in January.

Typically, Mars in Taurus would be a slow, determined and laid back, plodding kind of energy, but Mars will make some serious clashes with Jupiter and Saturn in Aquarius, along with Uranus in Taurus. During these times stubbornness and inability to bend may be a problem, and we could experience anger and frustration ourselves, and we will see it play out on the world stage.

Mars in Taurus will slow things down, which will be a relief for many after the hectic go-go-go energies of Mars in Aries. People may seem more determined, if not stubborn in their actions. Decisions made and actions taken during this period may be permanent in nature.

There can be an earthy type of sensuality to Mars in this sign, and after all Taurus is ruled by Venus. We will be more inclined to look for material and physical comfort. We will be attracted to beautiful things of lasting value as Taurus likes fine things and luxury as well as value for the money.

As Taurus rules the 2nd house of money, there will be a greater focus on making and keeping money, and will be focusing on practical matters as long as Mars is in this sign. Mars in Taurus is prone to determination and reaching goals in a slow but steady manner.

Fixed signs like holding onto things and change comes slowly for Taurus. Holding on to anger can be a problem with Mars in Venus ruled Taurus. Many would rather try and keep the peace, holding onto things until it reaches a boiling point and then they explode.

Mars in Taurus will work best for the other earth signs-Virgo and Capricorn. It can work well for Cancer, and Pisces. This period will bring more stress to Scorpio, as Mars in Taurus will oppose Scorpio, or any Scorpio planets placed in the chart. Mars in this sign will also be more difficult for the other fixed signs: Leo and Aquarius as Taurus creates a challenge to these signs along with more obstacles and blocks. None of this however, will be anything that cannot be overcome with patience and fortitude.

Mars makes a number of stressful aspects in January and after these transits have passed we will see more of the laid back and steady side of Mars in Taurus.

January 13th, Mars clashes with Saturn which is tiring, frustrating energy. It will play out in terms of world events, but may create a great deal of frustration if not delays, in our own lives. It is best to relax and know this energy will soon pass, and the blockages we feel at this time will improve quickly.

Jupiter clashes with Uranus January 15-19, and is exact on January 17th.  Jupiter-Uranus is revolutionary energy that has to do with sudden, unexpected events, and as Uranus turns direct January 14th, this makes it more even more powerful. Mars joins this configuration on January 20th when it conjuncts Uranus. This can make for an explosive day, with things going differently than planned.  Mars conjunct Uranus can produce excitement, but it can also be indicative of sudden changes, outbursts of temper and a danger of accidents, explosions and sudden change. Surprise attacks are something to watch out for.  This will be a volatile day.

January 23rd, Mars squares Jupiter. This can be indicative of blowing things out of proportion. Alternatively, this transit can confer real courage and a desire to step up to the plate and do what is necessary if a crisis of some type occurs