The planet of luck and gain steps back: Jupiter retrograde 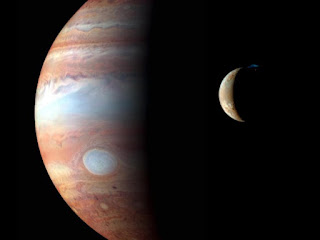 If you have been working at accomplishing something with no real structure or plan for getting there Jupiter retrograde will be the time to step back and look at the bigger picture and how you will approach things. It does not necessarily mean loss, but is more akin to working smartly and directing your actions along the most profitable and fortuitous lines.

Many things can be affected by a Jupiter retrograde. In addition to money and finances Jupiter rules courts/judiciaries lawyers, foreigners, and foreign places, education, religion, medicine, and spirituality. All of these things can shift in some way and we will see these matters play out and change in the world and our personal lives.

Jupiter turns retrograde in Pisces June 20th and will remain in this sign until July 29th, when it retrogrades back into Aquarius, so Jupiter’s retrograde period spans two signs this year.

Pisces is the natural ruler of the 12th house of endings and things that are hidden or secret. As Jupiter retrogrades in this sign, certain things may be revealed you were not aware of. As the rulers of Jupiter are Pisces and Neptune we may feel a bit confused as Jupiter begins its retrograde as Neptune is the ruler of illusion, delusion and confusion. The beginning of the retrograde can be more noticeable because of the shift in energy at that time.

We must guard against being overly optimistic, and view things as they really are, not as we want or hope for them to be. Under this aspect we need to be aware of scammers, con artists and the like, along with others who may try and deceive us, and at times this can include self deception. This is truly a time to keep your feet planted firmly on the ground and check out all information if it involves money or some type of commitment. All things may not be as they appear at this time. Sacrificing oneself and personal beliefs to accommodate another person seldom works out well, and this is something else to be aware of. This who are prone to alcohol or substance abuse may have a much harder time during Jupiter’s retrograde in Pisces.

Jupiter in Pisces is connected to creativity, spirituality, creative expression, compassion and intuition on the positive end. Jupiter is also associated with the 9th house of ideas, travel, education, publishing, world view and religious or philosophical viewpoints so there will be a great deal of focus or expansion in these areas as well. Our personal world views may expand or change along with a potential yearning for travel and faraway places. Jupiter’s retrograde in Pisces will be a time of inner reflection, creativity, compassion and for some a spiritual journey. Dreams may be vivid and you may feel as though your intuition is increasing.

In the world it is likely we will seen an increase in propaganda and conspiracy theories, some of which will be over the top. Be aware of what you read and believe during this period.

Jupiter in Aquarius rules the 11th house of the collective and is associated with brotherhood, freedom, and new ways of approaching things. There will be more concern with the collective, and how we personally fit into things. As Jupiter retrogrades back into this sign, many things will become much clearer than they were while Jupiter was in Pisces.

While Jupiter was direct in Aquarius we saw many new ideas being presented that affect the collective. During its retrograde, details will be worked out, and we will learn just how much benefit we will all reap from new ideas and approaches.

Aquarius is ruled by Saturn and Uranus, so during this time we may see many sudden and unexpected things happen in our lives and the world. You could be tested to make sure you are ready to receive the abundance you desire. Retrograde Jupiter can help you face issues such as addiction, a mentality of lack, or other issues that may be preventing you from reaching your goals.

In the world we can expect more political disagreements during Jupiter’s retrograde and a great deal of political turmoil if not upheaval. In a way this period will represent the will of the people versus the will of those in charge.

By the time Jupiter stations to go direct in late September, you should have come to terms with any issues you faced during Jupiter’s retrograde.