Two lives on a collision course: JFK and Oswald 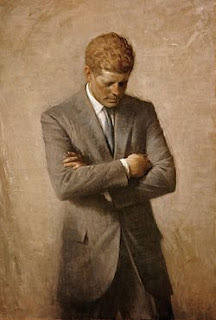 It's been 58 years since one of America's most loved Presidents of the 20th century was gunned down in Dallas, Texas one sunny November day in 1963. Some reading this post will remember November 22, 1963 as the day Camelot ended.  Jack Fitzgerald Kennedy was riding in an open motorcade with his wife Jackie, and Texas governor John Connally and his wife, when gunshots rang out fatally wounding Kennedy and injuring Connally at 12:30 p.m. on November 22, 1963. By 1 p.m. the President was pronounced dead, and America descended into a deep state of mourning that would change a way of life forever.

Two days later his alleged assassin, Lee Harvey Oswald was gunned down on national TV by Jack Ruby as the world watched, and many believe the true nature of the shooting has never been revealed and conspiracy theories exist to this day as to who was actually responsible for the death of the 35th President of the United States.

President Johnson created the Warren Commission—chaired by Chief Justice Earl Warren—to investigate the assassination, which concluded that Oswald was the lone assassin. The results of this investigation are disputed by many. The assassination proved to be an important moment because of its impact on the nation and the ensuing political repercussions. (Wikipedia) However, the HSCA (United States House Select Committee on Assassinations) concluded that those investigations were flawed and that Kennedy was probably assassinated as the result of a conspiracy.

John Fitzgerald Kennedy was born May 29, 1917 at 3:00 p.m in Brookline, Ma.  He had a 7 degree Gemini Sun with a Venus in Gemini falling next to his Sun which accounts for his charm and charisma with the ladies and the public as well. His womanizing and affairs that were so prevalent during his Presidency the Secret Service was said to have no control over who entered the White House during his reign.

His Virgo moon falls at 17 degrees in his 11th house of groups and trines his Mars/Mercury in Taurus accounting for his skills as a great orator, but as Virgo rules the 6th house of health, he suffered from various health issues all of his life.

The most astounding thing about President Kennedy's chart is the fact that 5 out of 10 planets fall in his 8th house that include Mars, Mercury and Jupiter in Taurus, and his Sun/Venus in Gemini.

The 8th house rules death, regeneration, sex, other people's money and inheritance, and has a connection to the mysteries of life, deep knowledge and secrets. Mars and Mercury lie at 18-20 degrees of Taurus in a conjunction, and these planets square Uranus which lies at 23 degrees of Aquarius just outside the cusp of his 5th house in Aquarius. Uranus was stationing retrograde on the day of his birth and Mercury was stationing direct on the same day making this a powerful combination! Uranus square Mercury made him a brilliant politician and speaker. He had many ideas and was responsible for initiating Project Apollo which would culminate in the moon landing in 1969, and Uranus rules spacecraft.

Kennedy lived out his life as the wealthy son of a businessman, investor and ultimately US President. He was known throughout the years as a man with many mistresses that included Marylin Monroe and Judith Campbell, Marlene Dietrich, Mimi Alford and Jackie's press secretary Pam Turnure to name a few.

Anyone born with the Sun in the 8th house tends to live lives characterized by intensity, drama and crisis. During his Presidency events included the Bay of Pigs Invasion, the Cuban Missile Crisis, the Civil Rights Movement, the building of the Berlin Wall and the Vietnam War.

As a youngster Kennedy was beset with health problems that included colitis, and later back problems, Addison's disease and hypothyroidism.  His elder brother died at age 29, and early in his marriage Jackie suffered a stillbirth and he lost a second son.

The fatal configuration in his chart that spelled out his assassination was the square (90 degree angle)  between Mars/Mercury at 18-20 degrees of Taurus in his 8th house and Uranus at 23 degrees of Aquarius in his 4th house, which rules end of life. Mercury, Mars and Uranus in such a configuration indicates risk taking, accidents, guns and explosive incidents. Those with planets in the 8th house, especially the Sun often leave a legacy that lives on long after death.

He was a former marine who defected to the Soviet Union in October 1959 until June of 1962. Oswald was initially arrested for the murder of police officer J. D. Tippit, who was killed on a Dallas street approximately 45 minutes after President Kennedy was shot. Oswald would later be charged with the assassination of President Kennedy as well, but denied involvement in either of the killings. Two days later, while being transferred from police headquarters to the county jail, Oswald was shot and killed by Dallas nightclub owner Jack Ruby in full view of television cameras broadcasting live.(Wikipedia)

Oswald had a 24 degree Libra Sun in the 4th house opposed by a retrograde Saturn in Aries at 28 degrees. These individuals often see challenges where they do not exist, and need constant reassurance of their self-worth which is often low. The Father may be non-existent or abusive in some way.

His moon lies in Capricorn in the 7th house in the sign of its detriment. The moon shows our emotional life and outlook and Capricorn is ruled by Saturn. Moon-Saturn, or moon in Capricorn individuals can appear cold and have a hard time expressing emotions, or they can be insecure. Achievement can be the most important thing in life, and perhaps even more so if they are not successful.

Like JFK, Oswald has a complex chart with difficult angles, and what stands out are three major oppositions which involve a T-square with  Mars, Pluto and Mercury. Oppositions and T-squares are stressful aspects, but t-squares are often found in the charts of successful people and are often considered 'drivers' toward success. In Oswald's case he was successful in assassinating the President of the United States, but otherwise considered a loser, and we can trace his problems to the T-square and three major oppositions in his chart. With transits like this an individual would either give in to the stress of the T-square pattern and succumb to the oppositional energies at work, or take the same energy and allow it to drive him toward success. In a strange way Oswald did both. According to reports and documentaries he was driven to do something that lifted him out of the mundane, and he was quoted in one documentary as saying he wanted to do something people would remember for a thousand years.

You can understand a T-square like this: There is a 180 degree opposition, and both are making a 90 degree square to a third planet, like an isosceles triangle!

In a T-square, the planet that is at the apex that squares both ends of the opposition functions as the catalyst in the entire configuration, mediating between the planets in opposition. This is an open, unstable, stressful aspect pattern. In the case of Oswald those planets that are both being aspected are Mercury and Venus at 6-11 degrees of Scorpio, squared by Pluto and Mars.

Oswald's Mercury which rules thinking and the mind- was in the most intense of signs: Scorpio, along with Venus which is considered at its detriment in Scorpio.

On one end these planets are squared by Pluto at 2 degrees of Leo which would show a person  with impatience toward others who do not think as they do. Skepticism and cynicism turns into fanaticism, and obsession and mental turmoil. An inner restlessness can drive the native to obsessive searches for knowledge and a preoccupation with death. Venus-Pluto shows jealousy and conflict in relationships, and can indicate abuse toward women in a man's chart.( Not all men with this transit abuse women-Oswald was reported to be abusive toward his Russian wife)

On the other end Mars squares his Venus, debilitated in Scorpio, and again showing lack of a stable relationship/money and of even greater concern, Mars squares Mercury making him mentally over sensitive, verbally abusive, and constantly upset.

Mars also opposes Pluto from the 8th house in the T-square and this shows an obsessive nature and a tendency to think about death along with the potential for violence.

There is actually a second T-square in his chart using an orb of 9 degrees that involves Mercury and Mars at 11 degrees of Scorpio/Aquarius and Uranus at 20 degrees of Taurus. Uranus makes him/the configuration mentally unpredictable, unstable and prone to outbursts of violent behavior.

The general definition of Mars-Mercury-Uranus is unpredictable violent situations and Mars rules guns. His life was a powder keg ready to explode.

Like JFK's transit, Oswald's Mercury-Uranus transit can be indicative of brilliance, but it can also indicate scattered thinking and it has been written this transit can give genius for incurring the wrath of others. This transit can cause the individual to assume his opinions are the only valid ones, refuse to compromise with others, and thinking can become unbalanced. As a child, Oswald was described by several people who knew him as withdrawn and temperamental. Oswald attended the 7th grade but was often truant, which led to a psychiatric assessment at a juvenile reformatory. The reformatory psychiatrist, described Oswald as immersed in a "vivid fantasy life, turning around the topics of omnipotence and power, through which [Oswald] tries to compensate for his present shortcomings and frustrations, and detected a "personality pattern disturbance with schizoid features and passive-aggressive tendencies and recommended continued treatment. In January 1954, Oswald's mother returned to New Orleans, taking Oswald with her withdrawing him from treatment.

Based in the configurations in his chart Oswald was an unhappy man, obsessed, mentally unstable and desirous of committing an act that would bring notoriety or fame without regard to who was harmed in the process.

A T-square is a powerful aspect as stated before. An individual with such a configuration would sink or swim in life, is one way of looking at it. JFK himself had a square between Uranus, Mars and Mercury in fixed signs like Oswald and reacted much differently to this energy! Of course conditioning, education and wealth impacted his decisions in life.

The configurations is Oswald's chart manifested themselves in a fatal way with JFK's chart.

Taking the T-square involving Uranus, Mars and Mercury in Oswald's chart and placing it over JFK's chart it falls directly on JFK's Mars-Mercury in his 8th house of death!

Oswald's Pluto in Leo conjuncted JFK's Neptune in Leo which between two individuals shows concern with large scale political, economic and social changes that affect humanity as a whole. It is said natives with this configuration can share in some way a common destiny shaped by large scale forces  of change within society.

There are other aspects too numerous to mention at this time. Destiny played out between these two men and society was made all the worse for it.

For the record, I do not personally believe Oswald acted alone. The Warren Commission was either duped, or did not want to release all of the information to the public.

To all those who remember this infamous day in history, and to those who only hear and read about it; this day is remembered as the day America lost its innocence and hope for which it has yet to recover.