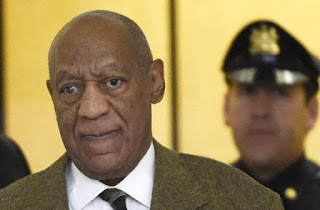 "Legendary comedian Bill Cosby arrived at a Pennsylvania courthouse Tuesday morning for a preliminary hearing in the sexual assault case against him. The purpose of the hearing is to determine if there is enough evidence for the case to proceed to trial. Cosby could waive the hearing and be assigned a trial date, or the hearing could go forward with prosecutors laying out some of the case they have built.

Cosby is back in court as the Neptune-Saturn-Jupiter t-square comes into orb late May 2016. I began writing about Cosby and the Neptune-Saturn square in 2015. Each time it comes within orb, Cosby is in the news again.

Today, May 24, Venus is also opposing Mars and this relates to trouble between the sexes-sometime issues surrounding sex are involved.

The t-square is a difficult and at times can reveal past actions that were previously hidden. This square seems to have a profound affect on Cosby's cases and his accusers.

The T-square involves Jupiter, Saturn and Neptune. This is a convoluted and often ugly energy, that makes it difficult to get to the truth.

Cosby's Mercury is at 23 degrees of Cancer and late May-June, Uranus is square his Mercury. This relates to sudden and unexpected news, and the transit is prone to nervous energy.

During June, the Saturn-Neptune-Jupiter t-square falls on his Moon at 11 degrees of Virgo. Saturn-Moon periods typically coincide with issues that involve women, and are some of the most depressing times of our lives. As Neptune is opposing his Moon the truth may be hard to reach. Neptune-Moon transits can coincide with lies, and deception that can be toward or from women.

The Saturn-Jupiter-Neptune t-square will be prominent June-July and the influence will last all summer.

Saturn will square Neptune for the final time during September 2016, and once again this square will fall on his Virgo Moon. This will be a tough year for Cosby. (5-24-16)

Early in 2015, I wrote, "Saturn squared Neptune for the first time late January-early February 2015 at 4-6 degrees but it did not become exact. For a moment we got a feel of what this transit would/could bring. The person that stood out to me at that time was TV personality Bill Cosby.  During this period many woman came forward accusing him of rape that goes back many years."

"Cosby has a Venus at 4 degrees of Gemini, so Saturn opposed his Venus during the first few months of 2015, and Neptune squared it. As this transit fell directly on his Venus, (women and money) news from his past (Saturn), or alleged news (the rapes are not proven) continued to multiply along with the number of women stepping forward with allegations. Prior to early 2015 as Neptune squared his Venus there were women who accused him of the same crimes, but it took Saturn (and numerous other women) to hammer the point, so to speak. As Saturn and Neptune fell on his Venus he has lost a great deal of money in endorsements, and his reputation was ruined, along with his career. Saturn and Neptune in combination have a funny way of bringing up past misdeeds. As we approach the end of the year I look for more news concerning Cosby to come to light. I can say with certainty this TV icon will never be viewed in the same light as he was in the past. This is just one example of the way this transit can bring change, but this is an extreme example, he is a known public figure and this is not the only transit in his chart."

On the last day of 2015 the above prediction occurred as Cosby was officially arraigned and released.

Cosby has a 20 degree Aries ascendant and his Moon-Neptune conjunction in Virgo falls in his 6th house of work. As the Moon rules women Saturn is square his Moon at 11 degrees, and will square Neptune at 16 degrees in March of 2016. Saturn-Moon is a negative and depressing transit and typically relates to issues with women, especially in a man's chart.

May-June will be another important period as the T-square between Jupiter, Saturn and Neptune will fall on Cosby's Moon. There could be a trial during this time, or will hear more news.

As far as I can tell no trial date has been published at this time.

In early 2016, the Uranus-Pluto square will aspect his Sun (Feb.-March) bringing more news. This will likely open Pandora's box with more accusers filing suits, some of the likely civil as the statute of limitations has run out on many of the alleged rapes.

2016 will be a difficult year for Cosby and it appears legal battles could go on for the next 4 years, even as Saturn moves into Capricorn in 2018. He could also experience health problems as a result of the stress or other issues.

It is also very possible he could serve time in Jail.(January 2015)