Your Mother, your Moon 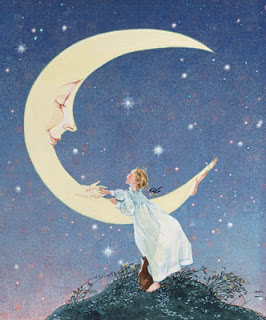 Your life is represented by your personal astrological chart-it is the blueprint of your life. All situations current and past, early beginnings and even your parents show up in your personal natal chart.

The Moon in a natal chart represents the emotions, the home, and shows us the Mother as well, and how we perceived her. In a man's chart it also shows the wife, or future wife.  Since the Moon represents the support system that you first experienced after birth, it describes the Mother.

No chart is the same and the Moon can make many different aspects with other planets. For example:

The above are some of the combinations astrologers can see connected with the Moon but often more than one planet aspects the Moon, and it also depends on the sign and where it falls in your chart. To get a clear description of your Mother, all aspects involved must be taken into consideration.

Your Moon can fall in one of 12 signs and this also describes your Mother in brief:

Moon in Taurus-Your Mother probably placed value in comfort and practical details. She may have like fine things and good value for the money. You may have considered her overly practical at times or stubborn. Once she made up her mind, the decision was typically final. Usually, she would have been considered kind, but held strong opinions.

Moon in Gemini-You Mother was light, somewhat intellectual in her approach and seldom boring. She could have liked gossip. She in all likelihood, did not live a restrictive existence, and was open to new ideas and thoughts. You may have seen her as a continual source of information and she encouraged your inquisitive mind. She may have been like a friend.

Moon in Cancer-Your Mother could have experienced a great deal of emotional upheaval in her own life, but she would have been nurturing when she was not in emotional pain herself, and you likely have deep emotional connections. You may feel a sense of duty and obligation to be there for her, and she you. She would have strong opinions as to how you would have been/were raised and the past was important to her.

Moon in Leo-Your Mother would be a bold presence in your life one way or another. She is not someone who held back on her feelings, and could be very dramatic at times. She was/is no wallflower.

Moon in Virgo-You would have experienced your Mother as down to earth and practical, and she could be critical at times, and you could be critical of her, or analyze her every action. But, at the end of the day, she got the job done and raised you to do the same.

Moon in Libra-Fairness and justice would be part of life with a Libra Moon (Mother.) You may feel you have to make sure you keep the peace, and this would be an important part of your relationship. She may have liked beautiful things, and significant relationships would have been important to her.

Moon in Scorpio-Your Mother would have been a passionate women, sometimes very private. You may see her as stubborn, intense and controlling or manipulative at times. You could view her as being very emotional, intense, and as you too are often private, the intensity can sometimes seem overbearing.

Moon in Sagittarius-Freedom would be a theme with your Mother-you or her. Fairness and justice may have been a theme. You may have seen her as less mature than other Mothers appeared, she could have seemed flighty or not as warm as you would have liked. Always fun loving though.

Moon in Capricorn-As Capricorn is ruled by Saturn your Mother may have seemed cold at times. She was all business, one way or another, she could have experienced a difficult life in some way, have been overly stern or controlling, and put work before pleasure. She was there for practical support, planning, and was/is security oriented.
Moon in Aquarius-Your relationship with your Mother could have been a bit distant or even detached. She was more intellectual than emotional and you probably didn't feel like burdening her with your problems. She may have relied on you more so than other Mother's and she may have wanted her space, or it seemed so at times. You probably matured early.

Moon in Pisces-She may have had to overcome many difficulties and had an inner emotional strength not all people were aware of, and she made sacrifices. At times she may have seemed lost in her own world, and you may have felt lost in yours as a result. She may have had a deep seated faith of some kind that inspired her, or she may have been highly intuitive.
(If you do not know your Moon sign your can look for a free ephemeris on the internet. Or there are numerous free moon sign calculators.)

In memory of Joan Hurley Peake- October, 3, 1924-May 21,1998, and all the other Mothers, daughters and sons that will not be able to celebrate this Mother's Day together.