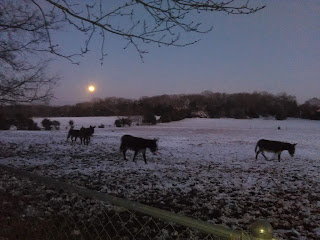 2019 starts out with a bang! Uranus turns direct January 6, a solar eclipse occurs, and every planet is moving forward in direct motion. After all the retrogrades and slowdowns of 2018, this is a change. What this means is we are free to move forward with our plans without delay.

But first, let's take a look at New Years Day. Quite a shift occurred the night before, as Mars moved into Aries. This puts the planet of action in a fire sign, and it is at the 0 degree world point. Astrologer Celeste Teal says 0 degree Aries represents "spectacular out rush of energies... and involvement with the world at large"

The Sun is conjunct Saturn January 1-2, and this seems like an especially somber day after the holidays. Many people may be making serious resolutions for the New Year. Sun conjunct Saturn will coincide with serious events and situations in the world, and it is time to get real for many and back to day to day responsibilities.

The Sun, Saturn, Uranus, Mercury and Mars are in Cardinal signs as we begin the month: Aries, Cancer, Libra and Capricorn are the Cardinal signs and they are the initiators of the zodiac and make things happen.

Mars move into Aries shifts the energy from laid back creative and spiritual Pisces to the high powered fire sign that is all about action, and it will remain in this sign until mid-February. Mars rules our action and ego, so most of us will start out the new year with a plan, or we will soon develop one. Aries rules the first house of self and self interests and we will begin the new year with new goals.

Venus, the planet of love and money, remains in Scorpio for the first week of the month, before moving into Sagittarius, a mutable fire sign. Venus has spent most of its time in Scorpio-Sagittarius since September of 2018, due to the 2018 (Venus) retrograde, and it will make one more pass through the sign ruled by Jupiter this month.

Jupiter, the planet of gain and expansion is also in Sagittarius, where it is at home and very powerful. Sagittarius rules the ninth house of travel, education, and world view and over the next year we will all benefit from this placement in some way, especially Sagittarius and all fire signs.

Venus and Jupiter will meet up on the sky January 21-22 at 15-16 degrees of Sagittarius and this meeting falls on the day of a total lunar eclipse I will get to shortly.

Neptune is the lone planet in a water sign-Pisces. Neptune is at home in this sign, where it will remain until 2026. The last time Neptune was in Pisces was before and during the US Civil war.

So, as we begin the year, the sky is dominated by Cardinal and Mutable signs. We will be moving forward, and our plans and energies will be subject to change.

Cardinal signs are divided into the elements of Water, Fire and Earth, and Mutable signs are divided into Water, Air and Fire elements. When these different elements meet up in the sky there is going to be a clash, and with clash comes change. The change may not be easy at all times, but January will be a month of significant change in our personal lives and in the world.

The first such clash occurs January 8, when Mercury squares Mars. We can expect tension, arguments and the potential of accidents.

January 13, Jupiter will square or clash with Neptune. This transit will be ongoing during 2019, and last for extended periods of time. While it is exact on this date, this only represents the peak and this energy is powerful at least two weeks before and after. Jupiter-Neptune transits can inspire creativity, compassion and spiritual awakenings, the other side of this energy can be fog, delusion, lack of clarity and the feeling or belief things appear better than what they really are. 2019 will be a year to keep our feet on the ground.

At the same time, Saturn sextiles Neptune, and this energy will be prominent at different times throughout the year, and while it is exact on January 31, the transit actually lasts at least two weeks before and two weeks after the exact date. This transit will combine imagination and the ethereal world with common sense and grounding. Creative ventures can turn into solid accomplishments, compassion will be combined with common sense and an ability to do something worthwhile or of value, and ideas can come with the ability to put them into action. This can be a grounding transit, which will be needed with Jupiter in its square to Neptune.
January 18, the Sun squares Uranus and we can expected sudden and unpredictable events. We and those around us could make a sudden break or change in our lives.
January 20, Venus squares Neptune and this can create fog and confusion in relationships and money matters. Relationships may be unclear and this is a bad day to finalize any significant money matter. The other side of this transit can seem magical, but we must remember Neptune rules illusion. But then, what is magic afterall?
January 21, Mars squares Saturn and this can seem limiting and restrictive, angry or frustrating. I would sidestep arguments if possible. The energy will pass soon.
January 23, Mercury squares Uranus and unexpected communication is the norm today. Some may be nervous, and this is accident prone. We could also have major problems with computers, cell phones and communication of all kinds. On the positive side you could experience an epiphany .
January 5-6, as Uranus turns direct, a partial solar eclipse occurs at 15 degrees of Capricorn. Uranus will play a particular role in this eclipse as its direct motion is very powerful on this same day. We will see many unexpected events in the world, and may experience great change (sometimes unexpected) in our own lives at this time.
Eclipses are like wildcards and an eclipse can seem good or bad, depending on what it aspects in your personal chart. An eclipse is often dramatic, or reveals important information. An eclipse can brings news pertaining to life's biggest events and the energy can be present for months or years to come. Important things, situations and even people can be eclipsed into and out of your life.
A solar eclipse is more like a new beginning, and it is always a new moon. A lunar eclipse can being news of endings and it is associated with a full moon.
The solar eclipse in Capricorn is conjunct Saturn and Pluto. Responsibilities will be forefront, along with change and transformation, and Capricorn rules the 10th house of career, priorities and business, and it is here we will be focused.
A stellium of five planets will fall in Capricorn opposing the north node and square Uranus. Change will happen quickly and it can bring up deep seated past issues. The Moon's sextile to Neptune can inspire creativity and compassion. It will affect those born under Cardinal signs, more than others.
This eclipse falls on fixed star Wega. Robison says with the Moon this star can' bring public disgrace, loss through writings, some ill health, success in business, gain through an annuity or pension.'
January's lunar eclipse falls at 0 degrees of Leo on January 20-21, and is considered a Super moon. This is the same day the Sun enters Aquarius and this is a total lunar eclipse. A Super moon appears closer to the earth and is associated with  major events and natural disasters.
Leo rules the 5th house of love, children, friends and creativity. As this moon opposes the Sun emotions may be high and on edge for a while.
Venus and Jupiter are conjunct (together) at 15 degrees of Sagittarius square Neptune. This can be creative and romantic, but it is important to remember Neptune is the planet of illusion, confusion and delusion, and many things may seem unclear or even too good to be true. Let this energy pass before making important decisions, although it could bring a few days of fun, entertainment and romance.
Other transits in January include:
January 13, Mercury conjuncts Saturn. Serious thought, negative news or attitudes, good for constructive work, tiredness.
January 18, Venus trines Mars. Great for love, social activity, upbeat and positive, Mercury also conjucnts Pluto and this can be good for researching matters, can be obsessive and argumentative. On the same day the Sun squares Uranus as already mentioned.
January 29, the Sun conjuncts Mercury and this can seem like willful energy and egos can be involved in communication.
This month will set the tone for the New Year and may it bring luck, happiness and prosperity.