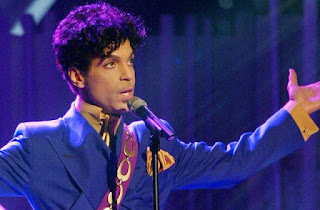 Singer Prince was pronounced dead April 21, 2016 at the age of 57.
Prince was renowned as an innovator and was widely known for his eclectic work, flamboyant stage presence, and wide vocal range. He was widely regarded as the pioneer of Minneapolis sound. His music integrated a wide variety of styles, including funk, rock, R&B, soul, hip hop, disco, psychedelia, jazz, and pop.

Prince was born in Minneapolis, Minnesota, and developed an interest in music at an early age, writing his first song at age seven. After recording songs with his cousin's band 94 East, 19-year-old Prince recorded several unsuccessful demo tapes before releasing his debut album For You in 1978, under the guidance of manager Owen Husney. His 1979 album Prince went platinum due to the success of the singles "Why You Wanna Treat Me So Bad?" and "I Wanna Be Your Lover". His next three records—Dirty Mind (1980), Controversy (1981), and 1999 (1982)—continued his success, showcasing Prince's trademark of prominently sexual lyrics and incorporation of elements of funk, dance, and rock music. In 1984, he began referring to his backup band as The Revolution and released Purple Rain, which served as the soundtrack to his film debut of the same name. A prolific songwriter, Prince in the 1980s wrote songs for and produced work by many other acts, often under pseudonyms.-Wikipedia.

Prince was born June 7, 1958 with a 16 degree Scorpio ascendant giving him a dark and sultry, mysterious look.

His Sun at 16 degrees of Gemini likes intellectual stimulation, communication and makde him clever, smart and versatile. 8th house Sun's often live many different lives that can be turbulent at times. The 8th house is the house of death, sex and rebirth, and any Sun sign placement in the 8th becomes Scorpionic in nature-deep, intense and in some ways seeking to understand the mysteries of life and death and all that lies in between. Persons born with this placement often live on posthumously and their accomplishments are recognized long after death. Actor Larry Hagman, who played JR Ewing on 'Dallas' had an 8th house Sun.

His Mercury at 4 degrees of Gemini also contributed to his talent and versatility, and Mercury ruled Gemini is the planet of communication (writing, singing).

His moon fell at 1 degree of Pisces, giving him a gentleness of nature, and great sensitivity as an artist and a person.

His Venus at 7 degrees of Taurus endows practical and artistic ability, falling in the 6th house of work. It opposes his Neptune at 2 degrees of Scorpio, falling in his 12th house, giving him great imagination. Neptune-Venus oppositions can fall in love with love, but have a hard time with the reality of relationships or fall in love with people who take advantage, or love for them may be different in some way from what most of us think of as a typical relationship.

Prince’s ex-wife Mayte Garcia has spoken out about their relationship, calling it the ‘most bizarre’ ever. She also admitted that he was her first crush, and she’ll love him forever. The dancer was completely captivated by the musician, and fell in love right away. “I remember our first kiss, and thinking, ‘Oh God, oh wow, this is not happening! I remember it being overwhelming and weird. Our entire time together was amazing and surreal, and he showed me some incredible things and introduced me to incredible people,” Mayte told The Mirror. “I think I’m now screwed for life because my first relationship was the most bizarre relationship ever and I’m not normal any more. I’ve kind-of been spoiled and I guess I am kind-of screwed-up now.”

Both Venus and Neptune square Uranus creating a t-square in his chart which is a powerful aspect that involves the energies of all three planets. Uranus at 8 degrees of Leo seeks creative expression in new forms. It was this powerful t-square that drove Prince's creativity. A t-square can be both difficult and positive, and in the end drive a person to success (or failure). It involved his 6th house-work (Venus), 9th house-publishing and outlook on the world (Uranus), and 12th house-hidden things, subconscious (Neptune).

His Mars fell at 0 degrees of Aries, making him a man of action. Mars here is very powerful in its home sign giving him energy, drive and confidence.
Jupiter fell at 21 degrees of Libra in his 11th house, and likes people, partnerships, and beautiful things, and gives artistic abilities.

Saturn in Sagittarius shows an interest in religious or moral issues. He was said to be a Jehovah Witness.  Prince said that he didn't consider it a conversion, but a "realization". "It's like Morpheus and Neo in The Matrix," he explained. He attended meetings at a local Kingdom Hall and occasionally knocked on people's doors to discuss his faith.

Prince was born in of the Pluto in Leo generation which seeks intense creative
expression (5th house) through love or creativity.

Timing of death
Prince was found unresponsive in the morning hours of April 21, and pronounced dead by mid morning, as reported by national news outlets.
Prince was said to have been suffering from the flu in recent days and was reported to have made many trips to the pharmacy.

The 8th house shows timing of death, and Saturn opposed his 8th house Sun. To an astrologer this would be a clear indication that serious problems lie ahead including the potential of death. His Sun in Gemini rules the lungs. Planets here sometimes also show unknown genetic disorders.

Uranus in Aries opposed his Jupiter in Libra, exact at 21 degrees. Venus at 20-21 of Aries was conjunct Uranus, also opposing Jupiter, almost exact at time of death. This shows an unexpected health issue that could have involved too much of something, possibly some type of substance, legal or illegal. The Moon was in the latter degrees of Libra, also falling on his Jupiter. As Uranus was involved he failed quickly.

The Sun at 2 degrees of Taurus opposed Neptune in the 12th. He was weak and debilitated, possibly confused, at the time of death.

The April 21-22 full moon in Scorpio fell exact on his Neptune in the 12th house, also associated with death, drugs and endings. Neptune in Scorpio can show 'watery' ailments like pneumonia, and substances that can turn toxic. There have been many cases of Neptune present at the time of death that are never resolved or remain mysterious.

The Heavenly choir has a new voice now.  The voice is angelic and yet familiar to us all. Prince's voice stands out strong among the many others we recognize and are lost to our earthly realm.  Prince will continue inspire us all long after he is laid to rest. RIP, Prince.