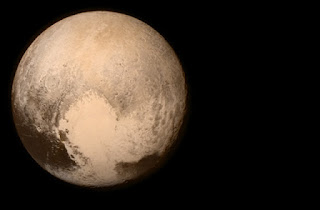 Pluto may have been demoted but make no mistake to its powerful affects when it transits your chart, and aspects other planets in the sky.

I generally describe Pluto transits through the natal chart as "change beyond your ability to control." When Pluto makes a harsh transit in your personal chart change will occur in your life with or without your help. The same goes for the positive aspects.

Pluto has been retrograde since April 18, and on Monday, September 26, it turns stationary direct at 14 degrees of Capricorn.

At this juncture it is very powerful, especially if it aspects something in your personal chart.

By the time we reach early December, Pluto will have transited half way through its long cycle in Capricorn.

Secrets may suddenly be revealed or come out of the shadows and we may see situations or even people turn obsessive in some way as Pluto has an obsessive quality to it.

Pluto rules the dark and hidden undercurrents, sex, bullies nuclear energy and raw power or those who hold such power. It also rules ultimate change and transformation. Typically when Pluto turns direct we see major events in the world. Case in point, the difficult recent days in Charlotte, NC.