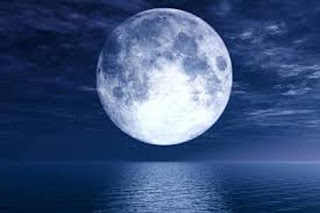 The full moon in Aries  October 16, looks to be one of the most volatile of the year, if not the most volatile. Aries is ruled by Mars, the God of War, and this is a 'hot' Moon prone to anger and upset.

This Moon falls at 23 degrees of Aries, and is conjunct Uranus in Aries. This makes it changeable and volatile, and Uranus rules explosions, coups, sudden breaks and unexpected information, aircraft, and changeability. Many people will want more freedom, and freedom is a theme with Uranus, and some relationships and other situations may even end.

This moon is considered a Supermoon making it more powerful. Supermoon is a phrase coined by astrologer Richard Nolle that describes a new or full moon at or near its closest approach to Earth in a given orbit. The Earth, Sun and Moon are all in a line with the Moon in its nearest approach to the earth.

Nolle explaines further, "SuperMoons are noteworthy for their close association with extreme tidal forces working in what astrologers of old used to call the sublunary world: the atmosphere, crust and oceans of our home planet - including ourselves, of course. From extreme coastal tides to severe storms to powerful earthquakes and volcanic eruptions, the entire natural world surges and spasms under the sway of the SuperMoon alignment - within three days either way of the exact syzygy, as a general rule. SuperMoon solar eclipses tend to have a wider sphere of impact, extending roughly a week before and after the actual event."

Many people will express revolutionary sediments and the more tightly you try and hold on to relationships (of all types) the more others may try to rebel. People are going to need space to do and try different approaches to things and my advice is to go with the flow and in many ways you may want to explore new options if the old does not seem to be working.

This full Moon is actually part of a t-square meaning 3 planets, or three groups of planets are involved.
This Moon conjuncts Uranus and opposes the Sun, as all full Moons do making things more emotional. It also opposes Mercury in Libra which rules young people, children, communication and travel. Mercury is still square Mars, along with Pluto and this is prone to anger, accidents, and agitation. Mercury-Pluto is an intense transit indicative of finding out previously unknown information.

The Moon also squares Pluto and Mars which are moving toward a conjunction next week. Pluto rules bullies and sex, as we saw by last week's Sun square Pluto. Moon-Mars transits relate to (angry or upset) women, and volatile emotions. Moon-Pluto transits relate to sex and deep seated issues that could include family.

You will be affected more by this moon than others if you have Cardinal (Aries, Libra, Cancer, Capricorn) planets at 21-26 degrees. Depending on what is in your chart we will all be affected by this moon, but not all will experience the volatility some will.
While I am not trying to scare people, caution is advised along with calm. We could see great disturbances and even violence in the world with this moon, and the influence will stretch over the next two weeks. Violence/disaster is especially possible around mid week (October 18-20) as Mars conjuncts Pluto in Capricorn. This too will affect those with mid degree (14-16 degree) cardinal planets.

At its best Mars-Pluto can relate to a desire for positive change and transformation.
This Moon falls in the 5th house of the US (Sibly) chart ruling young people, children and entertainment. It squares Pluto in the second house of money, and while this may deal with money it can deal with sex, issues concerning sex, and other deep seated emotional issues. Pluto rules powerful people who often try and force or express their power.

Pluto and Mars are aspecting Saturn in Libra in the US chart at 14 degrees. Saturn rules our stability and it may be shaken, or see could see violence, and great anger overall is a certainty.

Much anger will center around the US Presidential election and we will see more information released around the full moon. It would not surprise me if we also hear news relating to nuclear incidents, situations or threats.