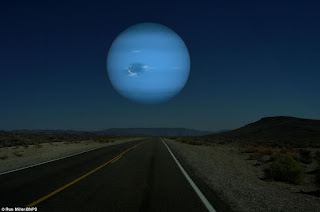 Neptune is the planet of mystics, religion, creativity and art, spirituality, and inspiration.  It is also the planet associated with illusion, confusion and delusion, addictions, lies and deception, self-deception, and the seamy side of life just to name a few things this powerful planet rules. Hence, the mystery surrounding Neptune, sometimes called the ‘blue planet.’

As this powerful planet goes direct confusion may increase for the time, and events will start to be revealed if it is aspecting other planets in your chart. Neptunian events have a tendency to appear as surprising, but in actuality the basis of Neptune related events was generally there all along, just hidden in a fog of confusion, lies or lack of clarity.  Such events tend to creep up on you and seem surprising at first, but the basis of the event was generally there, just obscured from recognition.

Surprises/events may occur for some individuals with Neptune in hard aspect in their natal charts.  If Neptune is good aspect to your personal planets it can come as a pleasant experience.  Others may barely notice if Neptune is not aspecting their charts.  Like everything else, it all depends on your personal chart.

Spiritual and creative issues are internalizes when Neptune is retrograde. Now that it is direct it will be easier to present artistic and creative ventures to the outside world.

In some respects many people may feel a type of 'buyer's remorse,' as Neptune moves forward. Many situations both in the world (this includes the US Presidential election as Trump picks his cabinet) and in our personal lives will be called into question as Neptune continues to move away from its square to Saturn that has dominated the skies over the past year, confusing the issues and creating a harsh, convoluted and depressing energy.

Confusion will abound in general over the next few days as Mercury squares Neptune on November 18, making this square especially powerful as Neptune stations here.

Events can include adverse weather conditions that involve water in some areas. Lies, deception, scandals and unclear situations will be prevalent, and some may experience personal confusion, depression and melancholy.
My advice is to make no important decisions until this aspect passes, and clarity will return.