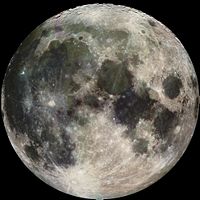 December's full Moon falls on December 3, peaking at 10:47AM, EST. This is considered a Supermoon, which means it is closer to the earth.

Supermoon is, a phrase coined years ago by astrologer Richard Nolle. What is a Supermoon? It describes a new or full moon at or near its closest approach to Earth in a given orbit. The Earth, Sun and Moon are all in a line with the Moon in its nearest approach to the earth.

Nolle explaines further, "SuperMoons are noteworthy for their close association with extreme tidal forces working in what astrologers of old used to call the sublunary world: the atmosphere, crust and oceans of our home planet - including ourselves, of course. From extreme coastal tides to severe storms to powerful earthquakes and volcanic eruptions, the entire natural world surges and spasms under the sway of the SuperMoon alignment - within three days either way of the exact syzygy, as a general rule. SuperMoon solar eclipses tend to have a wider sphere of impact, extending roughly a week before and after the actual event."
The energy of a Supermoon typically increases the energies you feel and respond to-for better or worse.

First of all, Mercury turns stationary retrograde at 29 degrees of Sagittarius, in the early morning hours, and this can confuse the issue, delay matters and make things generally hard to understand or figure out. The stationary period is typically the most confusing and difficult time of the retrograde.

This Moon also becomes part of a tight mutable t-square involving Neptune and the Sun. While Gemini is about communication, and the Sun (Sagittarius) is about truth, Neptune (Pisces) obscures, hides or confuses the truth.

So 'the truth' may be hard to come by, or as Neptune is involved you could be deceived by others or yourself on some matter, depending on where this t-square falls in your chart. This does not however, mean that you should assume the worst. In a few days this energy will move on and things will have more clarity. Some people may feel tired or melancholy.

A t-square is a difficult configuration that involves the energies of all three planets. Multiple situations are often occurring in your life at the same time.

A positive use of this energy is creativity or helping others. Dreams may be unusually vivid, and your imagination may soar. Make the most of this.

In the US natal chart this Moon conjuncts Uranus and Mars. Unexpected events and anger in the population will be present. Issues may arise concerning media, Money, taxes, and it is highly probable facts will be distorted and all things not as they appear.
With Neptune involved we could see weather related conditions that could impact us as well.