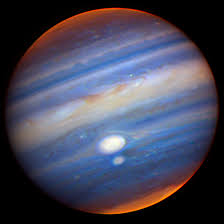 Jupiter is the planet of gain and expansion and wherever it falls in your personal chart is where you will see gain during over the next year. Jupiter's last transit through Sagittarius occurred November 24, 2006-December 16, 2007.

Sagittarius is ruled by Jupiter, making the planet of expansion in this sign very powerful. Sagittarius is the natural ruler of the 9th house of travel, education, religion, and world view and over the next year our focus in the collective will be here. It's time to see the glass as half full rather than half empty.

Sagittarius is an optimistic sign overall, and it is a fire sign, so those born under the fire signs (Aries, Leo, Sagittarius) will benefit greatly by this placement. Fire signs are considered passionate, dynamic and often temperamental. This placement will also work well for Air signs or those who have planets in their charts in Air and Fire. It will aspect everyone in some way.

Jupiter's transit through this sign will expand our consciousness, knowledge and understanding. Growth, generosity, abundance, adventure, travel and fairness are the trademarks of Jupiter in Sagittarius.
It will urge us to expand our higher minds, cultural and spiritual awareness and expand our thinking and beliefs. At the same time we must not slip into an arrogant know-it-all attitude as this can be the downside of expansive Sagittarius
During its transit through Sagittarius, Jupiter will square Neptune three times. This will occur January 13-16, June 15-22, and September 15-21. While these are the times Jupiter and Neptune will be exact within 1 degree, these periods actually last much longer as Jupiter has an orb of 10 degrees.
When this occurs occur we can expect to see scandals, lies, untruths and will have to discern what is real and what is an illusion, both in our personal lives and our collective lives. This is also a transit relating to theft, and it can be theft of property, internet hacking, personal theft, or theft of the heart. It can also represent self-delusion. Neptune has a way of making the unreal seem very real at the time, and it important during these periods to base your decisions on the facts, rather than what you would like the situation to be.
I liken this transit to the Saturn/Neptune square that occurred in 2016. We have since collectively learned Russia made a concerted effort through social media to influence the US election. We also saw 8 major cyber attacks, among many other issues. In some way this was a turning point of paying attention to facts. Lies and distortions of the truth became rampant on social media and it became harder to discern fact from fiction, and 'fake news,' from what was real.
While the negative side of this will be manifested as unclarity, untruths, lack of clarity and illusion, the positive side will be manifested  as creativity, psychic awareness and sudden understandings of the universe or spiritual awakenings of some type.
Neptune is a double edged sword and what may seem real, may only be an illusion and it may be hard to discern, as Neptune is the planet of illusion, delusion and confusion. Dreams will be vivid among many people during these times and psychic abilities will be enhanced.
Religion/spirituality and compassion for others will come into play whether real or made up. This could include religions of many types, faiths, and people, not all of which everyone will subscribe to. We could see scandals related to religion, and the Vatican is often a focus in some way with transits like this. It may be a banner year for music, art or any creative venture, and we will likely see advances in medicine.
The key will be to stay grounded at these times, and perhaps take the attitude, 'if it seems too good to be real, it probably isn't real.'
Sagittarius is known to go overboard. It can expand the more negative qualities of the sign as well as the positive just as Saturn in Sagittarius did when it squared Neptune in 2016.
Sagittarius, ruled by Jupiter is connected to the law, politics, religion, creating wealth, education and foreign interests.  Many people will have their own opinions on the world and politics, just as they did in 2015/ 2016 when Saturn was in Sagittarius.
Jupiter in this sign should work especially well for Sagittarius, who will reap significant benefit of Jupiter's placement here. Jupiter transits our personal signs only once every 12 years.
Below is a list of where Sagittarius will transit through your chart.  If you know your ascendant, use this. If not, use your Sun sign as both are correct. This is where you will see gain through Jupiter in Sagittarius.
Aires-9th house of travel, education, medical or legal issues and world view.
Taurus-8th house of debt, sex, change and transformation, other people's money, mortgages, lawsuits, inheritances.
Gemini-7th house of marriage, committed relationships and partnerships.
Cancer-6th house of work, health, service to others and pets.
Leo-5th house of children, friends, love affairs.
Virgo-4th house of home, family, and the basic foundation.
Libra-3rd house of relatives, neighbors, immediate neighborhood, the mind and thought processes.
Scorpio-2nd house of earned income and possessions.
Sagittarius-first house of the self. This should be an expansive year.
Capricorn-12th house of isolation and self healing.