The God of War turns retrograde 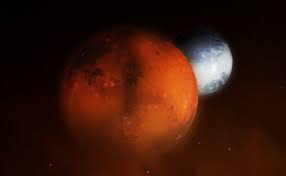 Mars turns retrograde September 9th at 28 degrees of Aries. It will remain in a stressful square with Saturn all month.

Some things that could happen with retrograde Mars:
-You begin a passionate love affair that  seems like the ideal to the point you are thinking of wedding bells. Mars turns direct and you discover that he (or she) actually has a girlfriend (or boyfriend) they have had a falling out with and decided to ‘give it another try.’

-You get a job that seems like a perfect match and things go well. Mars turns direct and you discover your new boss is really an ogre.

-You go on a pleasant hike at the local park, slip on wet leaves and find yourself in the ER and a cast for the next two months.

While these examples are worst case scenario, retrograde Mars is definitely a transit to respect and be aware of We will make many changes during these weeks, and awareness is important. Let’s look deeper!

The planet Mars rules our action, our egos and men. It also rules passion and sex, our ability (or inability) to assert ourselves, and how we pursue our goals. It is the planet that rules war and police as well as guns and violence which is why astrologers refer to Mars as “The God of War.” Mars placement and sign it occupies in your chart indicate how you approach your objectives, take action and in a woman’s chart it shows the kind of man she is attracted to (along with the Sun and Venus). Mars is typically associated with men, and Venus with women but they are not entirely gender specific and we all have both planets in our charts.

When we have a difficult Mars transit occurring by square or opposition especially, we typically suffer some type of setback, agitation or anger. Mars transits can also indicate surgery or accidents but typically this is not the case, as we will experience multiple Mars transits each year. If a difficult Mars transit occurs along with another more substantial transit it can play a role in major life changes or events.
Mars entered Aries June 27th and will remain there until January 6, 2021. Mars is Aries is very powerful as it is considered by astrologers to be ‘at home’ in this sign. Aries rules the first house of the zodiac which represents the self; or ourselves. With Mars in this sign we are interested in our own priorities and wishes. Which means everyone else is interested in their priorities as well, and herein lies the problem. Mars in this sign is not prone to compromise or backing up and can be very aggressive. Unfortunately, we will see a great deal of aggression and anger in the world during this cycle and especially the latter part of September into October as Mars will bring some major clashes in all likelihood between opposing forces.  Politics will play a big role and we will see political scandals and those who behave very badly. During the time Mars is retrograde we will back up and reconsider many situations and how to deal with them more effectively going forward.

Mars is within orb of Saturn all month. This will be a frustrating time where we could experience some anger issues, frustration and setbacks.

Mars retrograde  occurs once about every 2 years. Mars was last retrograde June 27-August 23, 2018. Take a look back at what was happening in your life at that time and you could have a clue as to how things will go this time.  When Mars turns retrograde it can coincide with major events if it is aspecting your personal chart as well as significant world events. People complain of low energy, tiredness, frustration and anger. We often become more accident prone with retrograde Mars, and we may reconsider many different situations.

Retrograde Mars can affect your love life as if Covid  and social isolation wasn’t  bad enough. Mars is associated with our sex drive and how we approach this area of life. Some may experience a low libido or even lack of interest in sex. Relationships can change or end altogether with a retrograde Mars, but unless your relationship is in trouble anyway, it is unlikely it will end. Beginning a new relationship on a retrograde Mars is questionable at best. Even if it seems as though things are going beautifully, it could change when Mars turns direct. If you are single it may be a good idea to take some time out for YOU.  Do the things you like, start a diet or exercise program in preparation for when Mars does turn direct. Just take a break from dating new people, or move forward at your own emotional risk.

Mars rules metal and this includes cars and knives. It is important to remember when the warrior planet turns retrograde we need to exercise more caution in our day to day activities so we don’t end up in the emergency clinic. Don’t take unnecessary risks on a physical level or while driving. Mars also rules or stamina and if you seem overly tired you may simply need more rest during this nine week period.
August 13-24th Mars squared, or clashed with both Pluto and Saturn. This was harsh energy and many experienced problems, frustrations and issues at this time. We saw major world events involving the political world, protests and police shootings, severe wildfires in California, and hurricanes that caused devastation in the Caribbean and the Southern border of the US. As Mars retrogrades and hits this degree again we will experience these same cardinal clashes for the second time September 29, (Mars square Saturn) and October 9, (Mars square Pluto). Of course these dates represent the day the transit is exact, and we will feel the energy in the days before and after just like we did in August. If you were affected by Mars on the above mentioned dates, you will likely be affected again.

Below is a chart of the area of life retrograde Mars will affect you. If you know your ascendant use that, if not use your Sun sign.
Aries-the 1st house of self and self-interest
Taurus-the 12th house of isolation, hospitals and places of seclusion and the subconscious mind.
Gemini-11th house of groups, friends and wishes.
Cancer-10th house of career and reputation.
Leo-9th house of education, travel, publishing, religion, law and world view.
Virgo-8th house of sex, investments, taxes, debt and joint finances. It also represents transformation and in some cases you could hear of a death.
Libra-7th house of marriage and partnerships.
Scorpio-6th house of work and health.
Sagittarius-5th house of children, friends and love.
Capricorn-4th house of home and family as well as the personal foundation.
Aquarius-3rd house of neighbors, short trips and imeadeate family.
Pisces-2nd house of money, finances.

Mars will finally turn direct on November 14, and after this date things will begin to ease up and return to normal. This will be the time to implement all of the plans we have thought about and re-considered over the past several months. Mars will remain in the sign Aries until it moves into Taurus on January 6, 2021.