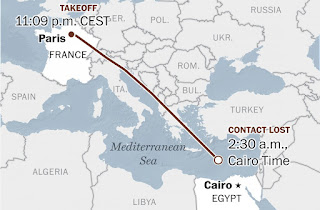 An EgyptAir fight from Paris to Cairo literally fell out of the sky last night (May 18, 2016) with all 66 people aboard presumed dead. Before crashing it made unexpected swerves in the sky as though the pilot had lost control.

Looking at the chart for this flight, the ascendant is 16 degrees of Sagittarius, ruled by Jupiter.  Jupiter opposes Neptune from the 9th to the 2nd/3rd houses, showing foreign influences that have to do with religion or  some type of ideology.

As the first house rules the plane, Pluto also lies here at 17 Capricorn, and it is square Uranus (explosions, unexpected events) and the Moon represents the passengers.

The Moon falls in the 10th house and  opposes Uranus. This transit alone shows a plane crash as Uranus rules aircraft, and events occurred suddenly and unexpectedly. (At the time of this post US officials are stating a bomb was likely.) Uranus can also rule explosions.

Malefic Saturn falls in the 12th house, ruling enemies (secret and hidden), and astrologer William Lilly wrote, "It hath signification of private enemies, of witches, great cattle - as horses, oxen, elephants, &c.; sorrow, tribulation, imprisonments, all manner of affliction, self-undoing, &c., and of such men as maliciously undermine their neighbours, or inform secretly against them."

Saturn is  part of a T-square involving Jupiter and Neptune, and as I have previously written, the t-square shows the possibility of terrorist attacks.

Mars also lies in the 12th house of secret enemies and Mars is retrograde at 3 degrees of Sagittarius. Mars rules guns, young men, and in Sagittarius it rules ideas-religion or ideology.

The energy of a full Moon begins at least a week before the Moon actually occurs and this Is a  volatile and angry full Moon that shows us the probability of  situations that involve guns, bombs and violence.

The Sun (representing the pilot) falls at 27 of Taurus having just crossed the fixed star Algol. Algol is the most malefic of fixed stars, and can indicate violent death.

My condolences to those aboard, their friends and families.
Posted by Leslie Hale at 10:21 AM