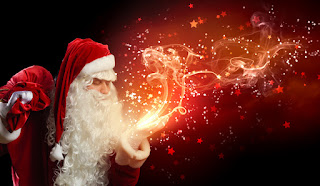 Santa Claus's chart has finally been discovered by Vedic astrologers, buried in an old vault in India!

Naturally with his fair complexion, generous and extravagant nature, pioneering in the area of air travel, justice loving (only well-behaved children get presents) and suspected laziness (he only works one month a year ) his ascendant is Libra. Also with the forceful sign Aries in the 7th position, he can push his elves to work hard. The secretive sign of Scorpio in the second also indicates that we do not know how he has acquired his wealth.

The sun is heavily afflicted being in its worst dig bal position in an enemies sign Capricorn, and closely conjunct the restrictive planet Ketu. Consequently he has been exiled to the North Pole and gets very little sunshine. Also he has no clear conception of self realization.

Note the powerful raja yoga in the fifth the house of children in the sign of Aquarius. Aquarius is the eleventh sign in the natural zodiac and therefore represents society. This man has made an immense contribution to society in the area of children. The combination of Venus and Saturn is peculiar because Venus the planet of love indicates his great affection for children but Saturn being the planet of detachment indicates his reclusive nature and consequently children never get to see the real Santa Claus.

Mercury debilitated in the sixth has meant that despite his technological achievements and popularity he has no literary work to his credit.

Mars in Taurus in the eighth according to Behari makes a person have an intense internal drive.This suggests the likelihood of secret (8th) developments in a technological (martian) field. During his Mars major period he is likely to be recruited by the U.S government to work on black projects at area 51. Mars is aspecting his own sign in the second enhancing his financial status.

Mars is also ruler of the seventh (house of marriage) in the eighth (house of death) and indicates the early demise of Mrs.Claus.The red cloth is indicative of mayavadi sannyasa.
Jupiter is producing a hamsa yoga in the tenth giving Santa a brilliant religious career (He has been elevated to sainthood while still living).Jupiter is also exalted in the Navamsa strengthening further the categories of wealth and children.

The conjunction of the waxing moon is further indicative of religiosity. However Rahus presence shows that no one can decisively work out the goings of his mind. (Written by Yadu Srestha)
Posted by Leslie Hale at 8:32 AM