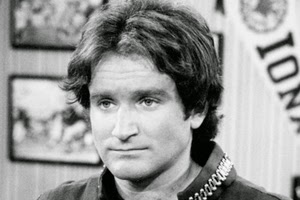 
Robin was a 28 degree Cancer with an 8 degree Moon in Pisces. This alone is a sensitive combination, with the key word being sensitive, and he would understand the full range of human emotions.


Add to this a 12 degree Scorpio ascendant-he was able to personify the depth of whatever character he was playing-along with a Mars conjunct Uranus at 11-10 degrees of Cancer and you have a portrait of a man who feels everything.  At times he was secretive.


Mars-Uranus gives him a quirky ability to come up with off the wall moments, and he may have had a bit of a temper in his private life, at times. Mars Uranus can be described as: unwillingness to submit to authority, a rebel without a cause, disruptive force, controversial assertions and actions, independent, shocking anger or violence, unconventional, unpredictable and angry outbursts,  crazy and exciting energy, electric, jittery, nervous energy, sudden recognition and knowing what to do, doing the opposite of what you should, and eccentric. All of this made Robin who he was and we loved him for it, but it is widely speculated he was manic depressive when could account for some of the extreme highs and lows which would also be indicative of this transit, and others in his natal chart.


Williams' Pluto was conjunct Mercury at 18-22 degrees of Leo, ruler of the fifth house of entertainment and he was able to look deeply into his character and dramatize his characters. This gave him an intensity that could penetrate our defenses and allow us to laugh at things we might otherwise find serious. He had the intense mentality to tap into his character and portray him (or her) to the fullest depths.


Mars and Uranus squared Neptune in his 11th house and Jupiter in his 6th, creating a T-square between the three planets. This pattern in his chart would give him his both his imagination that allowed him to soar to creative heights and his addictions. In other words, his T-square gave him the best of himself along with the worst which is generally the case, as a T-square will often do.


This transit (T-square) could be described as a self induced violent ending and indicative of suicide in the natal chart:  Mars-Uranus-(violence) square Neptune (death-drugs-the subconscious mind) opposing Jupiter (over the top actions, drugs, a medical issue), and  death was by asphyxia- suicide by hanging.


His Venus and Saturn were both in Virgo, and Venus fell in his career house. Virgo pays attention to details and this gave us the intricate, complicated characters he played so well. But, Saturn and Venus in this sign can also be overly critical, sad and self-depreciating. He took his personal failures too seriously and was so critical of himself in the end he decided to check out of a world that adored him when he could no longer love himself.


He was said to have re-entered rehab in July and was fighting serious depression. Pluto was opposing his Mars-Uranus, square Jupiter, setting off the T-square, as was transiting Uranus. Pluto-Mars transits are indicative of anger, violence, extremes and a deep desire to transform in some way. He must have felt as though something in his life was out of his control. Asphyxia would bring a violent ending.


Uranus was conjunct Jupiter in the 5th house (drugs, addictions, a medical issue) and opposing Neptune in his 12th house. Uranus-Neptune transits are indicative of drugs, alcohol, unclear thinking, confusion and lack of clarity/depression.


Basically, the powerful Uranus-Pluto square currently dominating the sky was setting off the T-square in his chart that contains the above mentioned planets. We have seen other public figures pass away as a result of this powerful transiting configuration and in the future we will see more, especially among the cardinal signs (Cancer, Libra, Aries and Capricorn).


Saturn had just moved forward from a retrograde period on August 11, amping up the energy of Saturn square Pluto-Mercury in his chart. Saturn-Pluto is a difficult transit, I often refer to as 'seething anger.' Astrologer Louis Aker describes it as "a hard unsympathetic austere attitude, dealings with circumstances that have a sinister and foreboding nature-increased will power and determination, involvement in power struggles and plots-serious professional problems and obstacles."


Transiting Neptune was conjunct his moon and this transit is indicative of addiction issues, unclear thinking, emotional issues, psychological withdrawal, and depression.


All of these transits involve the heavy outer planets, and these are the times in life we face our biggest obstacles and fears. Had he lived his struggles and depression would have continued for some time into the future.


The full moon is Aquarius opposed his Pluto-Mercury the day before his death, exact, and the Sun was conjunct Pluto. Sun-Pluto-moon transits deal with deep seated personal issues, and can result in psychological meltdowns. He died on his solar return-the day of the month the moon returns to its birth placement in the natal chart.


On the day of his death, August 11, 2014 Robin's Progressed Mercury was conjunct Mars and transiting Mercury was conjunct Mars-Mercury which would result in a serious 24 hour period of extreme depression/agitation.  As Mercury rules our thinking, William's thinking become absolute in the direction he would take. His body was found hanging from a bedroom door according to authorities in Marin County, Ca., discovered by a personal assistant at 11 A.M.


The laughter has died, and sadness and seriousness now replace  what was once  a bright light that brought hours of happiness, fun and laughter to so many around the world. As his life is discussed and the shock of recent events sets in perhaps this tragic event will shed a light on the seriousness of the disease known as mental illness and how we treat it as a society. Thanks for the laughs. RIP, Robin Williams.