The astrology of Ferguson, MO., and Michael Brown 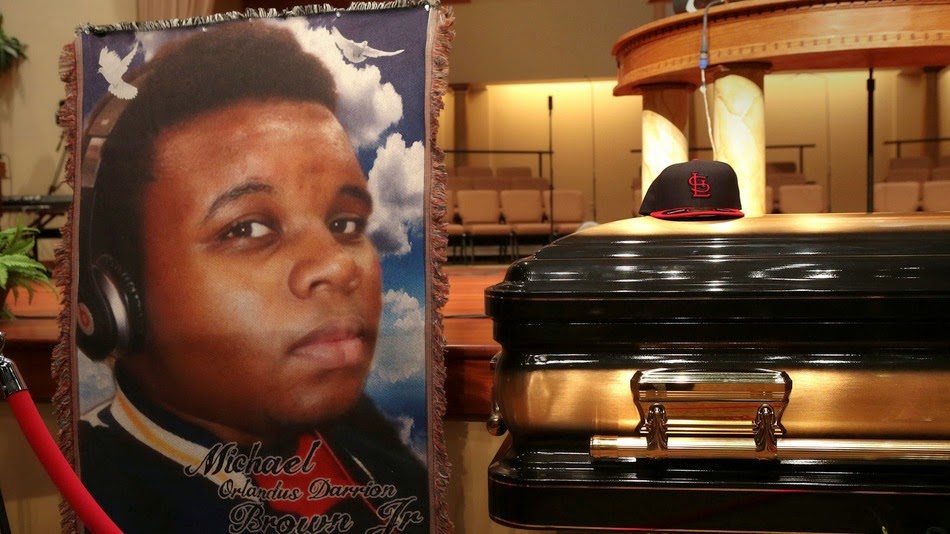 
Cities like people, or anything else have a birth chart and Ferguson, MO was incorporated on November 19, 1894,  (according to Astrologer Matthew Currie) which gives this city a 27 degree Scorpio Sun and places 5 planets in the same sign. At the time of the Brown shooting, Saturn was conjunct Uranus showing an unexpected event with potential for violence.  The funeral of Brown shows up as a major event both in Ferguson and the chart of MO itself, as Mars is conjunct Saturn, and Mars-Saturn conjuncts Uranus in Ferguson's natal chart which I would call a major event with a cruel undertone.


Using 12 noon is not something I like to do, but as we do not know the time of the cities' incorporation, this is standard for any chart, and this gives Ferguson a 23 degree Leo moon. The moon shows the mood of the people, and I would call this a sobering aspect, and a wakeup call for the residents for some time to come.


During the latter part of the year Saturn will conjunct the Sun of this natal chart, and this transit will be prominent for many months in 2015. As Saturn conjuncts the Sun changes occur on major levels, and there is no doubt this incident involving Michael Brown will change the city in many ways, likely even some of its leadership. But growth and change is difficult and slow.


Taking a brief look at Brown's chart with the city of Ferguson, itself, if anyone had ever asked, I would say that Ferguson would be a dangerous place for Brown to live as his natal Mars at 13 degrees of Taurus opposes both Mercury and Uranus in the Ferguson chart at 11/16 degrees of Scorpio.


Brown's Sun opposes the Sun of Ferguson as well and I would call this conflict. The moon of Ferguson which lies around 23 degrees of Leo also squares Brown's Taurus planets, another bad dynamic.


The city of Ferguson has Mars at 21 degrees of Aries, and Mars represents "the forces which hold a state together, or drive it apart in terms of aggression, according to astrologer Nicholas Champion. Champion writes, 'at an archetypical level Mars also represents the collective need of a society to have enemies, to express itself aggressively." Mars in Aries is at home here, and shows an aggressive police force as evidenced by the military equipment Ferguson employed during the protests and the police officers who have been removed from duty due to racial and volatile rants. Ferguson's Mars at 21 Aries squares Neptune in Brown's chart creating a confusing and discouraging dynamic, and we may never completely know the sequence of events that led to his death, or they may be misrepresented in some way.


Michael Brown was born May 20, 1996, according to Wikipedia, no time of birth has been published. The Sun changed signs that day around 2 P.M, so without his time of birth we don't know whether he was a  Taurus or a Gemini. Either way, his natal Sun was in opposition to Pluto at 1 degree of Sagittarius, falling in or close to his 7th house of open enemies from his Sun in his birth chart.


Astrologer Robert Pelletier tells us, "the Sun in opposition to Pluto shows that you are defensive when challenged by others. You generally assume your opponent has more power than you and your own position is insecure. If it becomes obvious you cannot win you may turn your back on the threat and pretend it didn't exist." According to reports, Brown had an altercation with officer Darren Wilson through the window of the police vehicle, then turned and ran with his friend. Sun opposing Pluto individuals encounter powerful enemies at times in their life, and these enemies can become their undoing. In Brown's case it appears to have cost him his life.


Mars represents action and aggression and at 13 of degrees Taurus, his Mars is square Uranus at 4 degrees of Aquarius with a wide orb of 9 degrees. Mars-Uranus individuals can have a temper, and be prone to accidents, injuries,  risk taking and erratic behavior. As a rule they do not like to be told what to do. This is a transit that could bring many sudden, surprising and even explosive situations into his life. At the time of his death, this square in his natal chart was being aspected by transiting Mars at 8 degrees of Scorpio which set it off and Mars can show police and volatile actions.


Brown's Moon is in home loving Cancer and which can give great depth of feeling. These individuals have a powerful memory and sensitivity that is unique to this moon placement. At times they can experience turbulent emotions, and once these individuals become your friend, it is generally for a very long time, if not life. Cancer moon individuals seem to have an ability to sway public opinion in an emotional way-remember this. Some well know individuals with a Cancer moon include Walter Cronkite, Nick Nolte, Keanu Reeves, Babe Ruth and Bob Hope, along with the UK's Prince William.


Brown was a motivated individual with Jupiter in Capricorn falling in his ninth house of higher education trine his Mars and Mercury. According to friends he wanted to become an air conditioner technician and own his own business. He had graduated from High School just 8 days earlier and was looking forward to starting his technical training. Had he lived he would have no doubt pursued his dream.


Mars and Mercury are conjunct in Taurus at 13 and 21 degrees and at times he could be considered stubborn, or even bullheaded, once he made a decision there was no turning back. Mercury rules speech and communication and Mars rules action. This indicates a restless and eager mind, and one that would not back down from debate.


Neptune trines Michael's  Sun and this would allow him to respond to what he learned both  emotionally and intellectually, and this would give him a certain psychic and intuitive ability. At times these individuals have enormous talent to express and knowledge can come through osmosis, simply absorbing it naturally through the environment and his own psychic facilities. It is usually the mark of a creative and gentle personality. These transits would cause him to desire to seek out another dimension in life: spiritual, artistic or in some way different. They are dreamers and idealists, sometimes hard to pin down and don't like to be labeled.


According to an ABC report Brown's stepmother Cal stated at the funeral Brown had been dreaming of death recently and stated to her, "'Because I've been dreaming of death, seeing pictures of death, seeing pictures of bloody sheets hanging on clotheslines,'" Cal Brown told the church filled with mourners. "That touched me. That’s what it was like when he was laying there on the street (after being shot). He prophesized his own death."


It's hard to understand how a young person with his future in front of him can be cut down in such a tragic way. Video's have circulated showing Brown robbing a store and threatening the clerk, and some witnesses attest to him threatening officer Darren Wilson. Whether or not he is guilty of these acts death is a high price to pay, especially considering the many far worse violent acts that warrant little or no time in jail for many.


Pluto opposing the Sun tells us that Brown could gain powerful enemies in life and push back. Mars-Mercury tells us that he could be argumentative or even verbally abusive at times. Sun-Neptune can make him a dreamer, perhaps naive in some of his actions.  Uranus-Mars gives him a temper and prone to taking risks and attracting unexpected situations into his life.


At the time of Brown's death transiting Saturn, at 16 degrees of Scorpio, was opposing his Mars (13 degrees Taurus) and Mercury (21 degrees of Taurus). Saturn-Mars transits can indicate frustration and is indicative of police. On August 9, Mars was at 7 degrees Scorpio having just crossed his Uranus at 4 degrees Aquarius-setting off the natal Mars-Uranus square in his chart. Mars/Uranus transits are indicative of sudden and explosive, unexpected situations  and  transiting Jupiter (Jupiter rules law, law enforcement, lawyers, young men and legal situations) was conjucnt his Uranus at this time.


Mercury and the Sun were conjunct on this day at 16 degrees of Leo, square Saturn in the sky showing us we would hear negative and harsh news in the world and this transit was also square Brown's natal Mars.


Michael Brown's chart contains a Yod which is a powerful aspect that looks like a triangle in the natal chart. It combines a sextile  (60 degrees) and 2 quincunxs.  The triangle has two 150 degree sides and the front of the triangle of 60 degrees across. The two sides point to a third planet which is the focus of the configuration and Brown's case it is his Cancer moon. Remember a Cancer moon can inspire large emotions, as certainly occurred on both the side of the protesters and law enforcement during the aftermath of the shooting in Ferguson.


A yod is considered a  rare configuration that infers fate or destiny and has been called the 'finger of God', 'the finger of fate,' and has been a source of debate for decades. This natal configuration is supposed to bestow a special destiny or a special purpose in life that can be karmic in nature.


A yod can be very challenging bringing circumstances of a repeated theme. A yod is said to bring difficult circumstances in life  and some astrologers believe a person with a yod to be working on a special lifetime task or mission. A yod has been referred to by some as an aspect of 'karmic readjustment', pointing to a special destiny.


There can be no doubt that as a result of his death, Michael Brown will be remembered for a very long time, and his death used as a means of pointing toward what many consider to be an inordinate number of police shootings of black males.


Hopefully, his death will serve a purpose and we as a country can take an unbiased look at what many claim are an inordinate number of police shootings/arrests and harsher sentences among black males. The world has now seen the differences of opinion and viewpoints among the segregated residents of Ferguson and heard their frustrations. Hopefully, peace and healing can come to all involved, and especially to the friends and family of the dead.


Of course the shooting deaths of Michael Brown, Kajieme Powell, and Eric Garner as well as the civil unrest met with military equipment and weapons in Ferguson paint a picture of racism and law enforcement run amuck and are all part of the powerful Uranus-Pluto square that continues to dominate our skies until 2016. Change is slow, but the Uranus-Pluto square is bound to bring it.


Uranus was conjunct Pluto in Virgo during the Civil rights movement of the 1960's. The Uranus-Pluto square of this time will insure we revisit this issue and continue to make changes as a society that did not occur in the 1960's. Change is always slow in the world but this time the first black US Attorney General visited Ferguson personally, and vowed to 'stand with the people of Ferguson." The last time Uranus was in a square to Pluto was the mid 1930's. In 1934-35 we saw the U.S. Nazi Riot, New York City, New York, the Minneapolis Teamsters Strike of 1934, the Auto-Lite strike, the1934 West Coast Longshore Strike, the Textile workers strike, and the Detroit World Series riot. This was followed in 1935 with the Harlem Riot, March 19–20 and the  Southern Tenant Farmers' Union Riot.


Anger over racial injustice is not new, but Uranus and Pluto shake us up and bring change and evolution to the world as a whole. Hopefully, by the time this powerful square completes the events that occurred in Ferguson will have brought  awareness and healing to the town and to the country as a whole.