A Princess is born astrology of Charlotte Elizabeth Diana 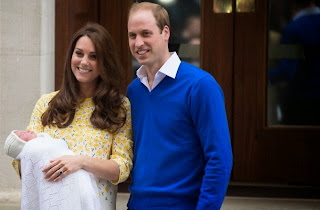 Charlotte Elizabeth Diana was born (Princess of Cambridge) to Prince William and Wife Catherine of the UK, and is 4th in line to the throne.

She was born May 2, at 8:34 A.M., making her a 11 degree Taurus (like her Grandmother, the Queen) with a 20 degree Libra moon and a 5 degree Cancer rising. She is the first female born whose position will not be usurped should she have younger brothers in the future.

With a Cancer ascendant she may remind us of Diana, who was a Cancer Sun. Like Diana, she has Neptune close to her midheavan which will draw a crowd, and she should be a showstopper, but enigmatic as well and always mysterious.
There will be many rumors about her, potential scandals and public interest, just like Diana.

She was born with Jupiter in Leo, the sign of royalty and Jupiter squares Mars-Jupiter and Mars known as the 'kingmakers transit," typical of the royal family. Mars and Jupiter are in a wide orb, as compared to her brother George, who will inherit the throne, and was born with a Mars conjunct Jupiter at 5/6 degrees of Cancer.

Jupiter lies in her third house trine Uranus and Jupiter in this placement generally shows more than one sibling. Jupiter-Uranus transits show wealth, and in this placement she may have some interesting insights during her lifetime, or even be drawn to writing. She will do things in a big way, and at times very dramatic.

She will be attractive as the Sun and Moon are in Venus ruled signs.

She will however be a private individual and will probably spend a great deal of time in seclusion or away from public view, as she has three planets in her twelfth house that include Mars, Mercury and Venus. With this placement she will probably also be a horsewoman, and at least have an interest in large animals.

While George was born with a prominent grand trine in Water signs-a sign of ease, with work is required to be successful, Charlotte was born with two T-squares, which show a more difficult life in many respects. T-squares however don't mean failure, and many prominent people have them in their charts.

A T-square is a difficult combination involving three planets. The first one is between Uranus, Pluto and her Moon.

Everyone born at this time is born will have a square between Uranus and Pluto, and this shows generational issues and experiences, and a rapidly changing world. These individuals will experience a life of dramatic change and upheaval as they become adults. The last group of people born with this transit were born in the early to mid 1930's, just before WW11, and they share this period in common.

Add to this square her moon at 20 degrees of Libra. Uranus/Moon individuals can be very changeable, and a study in contradiction. When they find themselves in stable situations, their personality can rebel and demand freedom. When left on their own, they can feel alone and crave closeness, and the cycle can repeat itself. At times they can be nervous and experience many emotional ups and downs, and they can feel detached. As Charlotte's Moon falls in her 5th house (children. love affairs, friends) it is in this area the battle between closeness and freedom will play out. At times she may experience difficulties with members of her own sex, and her relationships can become volatile.

As Pluto also squares her Moon, this is also an emotionally intense transit. Pluto lies in her 7th house of marriage, close partnerships and open enemies. Her partners will be powerful and could end up her enemies. Pluto-Moon individuals feel things deeply and intensely. But, these individuals can be manipulative, and she will be drawn to powerfully manipulative partners. This is an intense moon, and there can be issues with the Mother or some other family member who may be seen as overly intense or controlling. During their childhood they may experience many emotional scenes, ups and downs and have these scenes come back to be relived at a later date. Charlotte will be an emotionally complex individual.

The second T-square, and the most prominent involves Mercury (12th house), Neptune in the tenth, and Saturn in the 6th.

Mercury opposes Saturn, and Robert Pellitier tells us, " The opposition from Mercury to Saturn shows that you are strongly opinionated and defensive. You have considerable intellectual ability and can accomplish any goal you set for yourself. You may be inclined to bend the truth in order to get your way with people, but people are more discerning than you realize and often are aware of your deceptions. In this way you will lose friends, which can make you depressed when you are alone. An isolationist to begin with, you alienate your few associates with your criticism and scheming. All this adds up to the fact that you must learn to mind your own business and have respect for the privacy of others. Don't assume that other people think a certain way and then complain because they don't think that way. Your professional life will be strained unless you can become engrossed in your own affairs and forget what the competition is doing. Becoming skilled and competent in your job will give you the security you need."

Neptune is the focal point of this T square which squares both Saturn and Mercury. Mercury-Neptune transits can indicate someone who may view the world in a different kind of way, show psychic abilities and compassion toward others and animals as well. Neptune square Saturn can cause her to be more discerning, even skeptical but at times lends itself toward melancholy and depression.

Saturn in her 6th house shows a life of service and it is in a wide orb to Jupiter in the third connecting her with her siblings.

Mercury is very powerful in her chart and her thinking will sometimes be a challenge. As Mercury rules siblings, we will have to see how she gets along with brother George. At times their relationship may be difficult, but with Jupiter in the third trine Uranus, this should help.

Good luck to the new Princess!