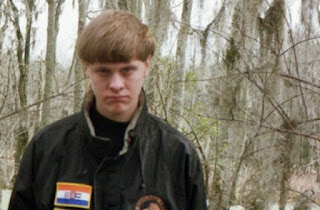 Nine people were gunned down June 17,  in cold blood inside a Wednesday night prayer meeting inside the historic Emanuel African Methodist Episcopal Church, one of the oldest churches in the South, located in Charleston, SC.
The Department of Justice is launching a hate crime investigation as and the gunman is identified as 21 year old Dylan Storm Roof, who opened fire killing nine people, including the church's pastor, identified as State Sen. Clementa Pinckney.

The shooting occurred at approximately 9 PM, June 17. Looking at the chart at this time, set in Charleston, SC,  the Moon falls in the 7th house of "open enemies", opposing Pluto in the first house, exact at 14 degrees of Cancer-Capricorn, and square Uranus in the third house ruling communication and neighborhoods. Moon-Pluto shows an overly intense person who wishes to show themselves as a dominant and powerful individual who has control over others. The moon effectively set off the Uranus-Pluto square still within a 5 degree orb.

Mercury (still in the post retrograde shadow period) falls at 5 degrees of Gemini in the 5th house and this shows a young male, and it is square Neptune in the second house which shows us a confused individual who had a religious or  personal ideological reason for the shooting and in some way money and his own personal image, of lack of, could have played a role in the killings.

The New moon fell on June 16, in the sign Gemini, conjunct Mars, and Gemini rules youth and Mars rules guns. The Sun was conjunct Mars and this too, is an angry transit along with the angry and volatile new moon.
Saturn is at 29 degrees of Scorpio (a critical degree), falling in the 11th house of groups and organizations, , and Scorpio is ruled by Pluto and has an 8th house (death) connotation.

Jupiter and Venus are in the 8th house (death) of this chart and Jupiter shows a young male. Jupiter also rules religion. As Jupiter is trine Venus in the third house his plan succeeded without a hitch.

Dylan Storm Roof was born April 4, 1994 in Columbia, SC.
He is a 13 degree Aries Sun. With this placement the Uranus-Pluto square has been aspecting his Sun showing many difficulties and changes over the past several years. Sun/ Pluto transits can increase personal ambition to the point of ruthless behavior, power struggles and trying to force personal will over others in extreme situations, and even life and death circumstances can arise.

He has a stellium of three planets in Pisces that fall in his twelfth house (solar chart) that include Mars, Mercury and Saturn. Pisces is ruled by Neptune, the planet of illusion, delusion and confusion, and his Mars-Mercury shows an active mind, but one that can become easily agitated and upset and prone to verbal abuse toward others and anger. Saturn especially, in the 12th shows an individual who is his own worst enemy. These individuals (multiple planets in the 12th) are often introverted and live much of their lives in seclusion.

Another stellium of three planets in Capricorn that include Neptune, Uranus and the Moon fall in his 10th house of priorities and the 10th rules the father. Moon-Neptune shows an individual who can be naive, deluded, easily swayed and confused, and Moon-Uranus shows emotional instability or changeability. This shows issues with one or both parents.

As the Moon was opposing Pluto at the time of the shooting, most telling is his own natal Pluto at 27 degrees of Scorpio that falls in his 8th house (death), along with Jupiter, and both planets are retrograde.

Pluto/8th house individuals often experience addictions, compulsions, power struggles, deep and unconscious feelings that can be experienced as outbursts of temper, and can experience much loss early on. Power struggles and crisis are common with this placement, and Frances Sakoian and Louis Acker tell us, "Pluto in the 8th house is a powerful occult influence that deals with the understanding of the continuity of life and consciousness after the destruction of the physical body. Often an extreme do or die attitude is present, life for these people is a serious business. Hence they are prone to getting involved in life or death situations which can cause them to reverse their way of life and moral outlook."

Transiting Saturn is conjunct his Pluto at this time and this transit is associated with power struggles, money issues, death, transformation and even terrorist activities.

With his Saturn at 7 degrees of Pisces, Neptune is/was conjunct it at the time of the shooting and Mercury was square it, creating an 'event' that can be described as confused, and based on a personal ideology or idea. He felt this was the moment to act. Neptune-Saturn transits are called 'the dark night of the soul', and often experienced as deep confusion, depression and insecurity, and coincide with a time that many elements of life seem to pass away, and the individual often feels betrayed by others.

As of noon, April 18, Roof has been arrested by police. An uncle of Roof's named Carson Cowles said he recognized his nephew from surveillance imagery, and  described the young man as withdrawn and troubled, and even worried he was "too introverted."

Cowles also recalled that Roof received a gun for his recent birthday in April.

(update) On 6-19, news reports are stating Roof bought the gun himself. He is reported to have admitted to the murders, and allegedly stated he wanted to start a race war.