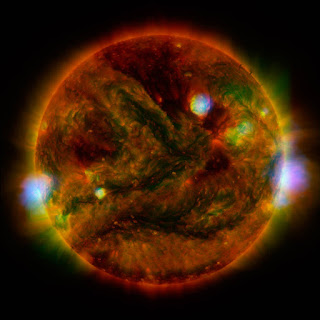 We are still experiencing some of the energies of the mutable grand cross/New Moon that occurred last week, as we begin the work week.

As we move on through the first part of the week, the Mercury-Mars opposition will be heating up, and this becomes exact on Thursday.

You may want to watch this, as typically this transit coincides with anger, frustration and harsh words. Even the Moon in Leo becomes mixed up in this, creating a t-square. This means the Moon(emotions and women) squares both planets and we are pulled in several directions. This will affect your chart more than others if you have fixed signs-Taurus, Leo, Scorpio, or Aquarius, from 24-27 degrees.

As the opposition falls in Taurus and Scorpio these signs clash naturally, and to call them stubborn is an understatement. If you lash out at someone expect blow back.

Also watch your personal movements, as this transit is accident prone. You could be on the road and experience other erratic drivers. Mercury also rules young people and pets.

You could have difficulties in some way with communication.

By Tuesday, we may feel this energy as the Moon in Cancer will oppose Pluto and square
Uranus and this makes things overly emotional.

This transit will play out in the world. We have plenty of angry talking heads on TV right now and expect more. I have seen other situations play out on these transits that involve transportation, young people, and big bursts of anger, resulting in disastrous moves.

Forewarned is forearmed.
Posted by Leslie Hale at 9:34 AM