Brexit: the UK leaves the EU 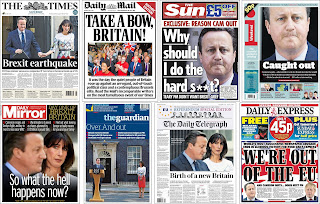 As the powerful t-squarebetween Saturn, Neptune and Jupiter was 'set off,' by Mercury the week of June 20, and the UK voted to leave the European Union, in a historic move that will geographically  and politically change Europe. The following day, June 24, the US Dow fell nearly 600 points and Prime Minister David Cameron said he would resign. The Asian financial markets were in free fall over the weekend and  June 27, the world financial markets reflect this change again with lower earnings.

Saturn-Neptune transits have to do with the rise of socialism, the British Monarchy, and terrorism on a worldwide level. As Saturn represents our stability, Neptune will have nothing to do with this, and change is inevitable, eroding our structures from the past.

I am no expert on European politics, but as I wrote months ago, Saturn in Sagittarius can have a worldwide effect on the financial markets, as Saturn the planet of restriction is in Jupiter's (finances) sign. Jupiter and Saturn have squared each other several times over the past year and this too, is not indicative of financial stability in the world.

We will probably see further fallout as Mars turns direct creating an inconjunct to Uranus, and Venus opposes Pluto later this week. We could see unexpected situations and further financial losses.  News outlets are reporting up to 2 million people are calling for a second referendum in the UK. Scottish voters overwhelmingly voted to stay in the EU. Such is the way with the mutable t-square where lack of clarity is a problem.

The decision to leave the EU was made on a retrograde Mars, which I question the timing of, and the Saturn-Neptune-Jupiter t square conceals facts that might otherwise be useful. June 27, news outlets were reporting political proponents of Brexit backing up on promises made to the public.

Taking a quick look at the chart of the EU, the mutable t-square falls on Saturn in the second house showing the results of the UK's departure will have grave financial consequences over the next few years. Other nations may leave. The entire union will be transformed as a result and it won't be easy.

Looking at the UK chart I see discontent among the people with Pluto opposing the moon and this transit will not end anytime soon. As a matter of fact this discontent will continue into 2018, and then Saturn will conjunct the Moon (the people) 2019-2020. I doubt the move from the EU will be what those who vote to leave believe it will be and there is much discontent in the years ahead.

In October 2017 when Jupiter moves into Scorpio, this will begin a new financial cycle that will be more positive (UK chart).
I will write more about this later, but I will end for now with the worlds of  UK astrologer Barry Goddard,  "So we need patience. Above all, right now, we need to deal with the anxiety that is created by uncertainty. You cannot have deep change without uncertainty, for the old has to die, and it is dying as we speak. As an astrologer, I know about the anxiety that people go through when change happens. Well we have a whole nation going through that anxiety, and it is inevitable but it doesn't help.

The part we can individually play is to understand that uncertainty is the price of big change. Put aside whether you voted in or out, for that is in the past. Recognize the courage of those who voted to step over the cliff, even if you think they were wrong. Recognize the desire to be connected of those who wanted to remain. All these qualities are needed.

At the moment, it is an energy thing. If you can dwell in the uncertainty without feeling anxious or despondent, that will create space for something creative to happen.

It was not a party political decision. The Tories were the tools of much bigger forces stirring in the UK collective unconscious. In the short term, you may not have the government you want. Put that aside. The referendum has shown that the people CAN make a difference, and it is the seed of that which we can work with. We are not helpless against the big corporations and the forces of globalization. We can vote in the government we want, and we have a chance to re-dream what this country is about. We can write laws that protect people and the environment that Brussels couldn't even have dreamed of. We just need patience and determination and a recognition that things are now possible that were not possible before."
Posted by Leslie Hale at 2:47 PM