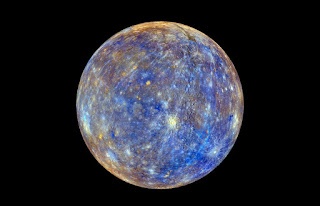 Mercury turns retrograde Monday, December 19, at 5:55 AM, EST.
This will be a powerful retrograde as Mercury is conjunct Pluto at 15-16 degrees of Capricorn. This will be especially powerful if you have Cardinal planets (Aries, Libra, Cancer, Capricorn at 14-17 degrees)

Mercury conjunct Pluto means intensified intellectual activity and opinions that can turn vehement at times, and Pluto has an obsessive quality to it. Mercury-Pluto transits can co-inside with finding out additional information as well. At times it can be construed as a 'detective transit,' that is searching for specific answers to a question or problem.

Mercury turns stationary retrograde December 19-20, and then begins its backward motion. On January 5, 2017 it retrogrades back into Sagittarius, where it will turn direct at 28 degrees (of Sagittarius) on January 8.

Retrograde Mercury is the planet that causes delays, glitches, breakdowns in computers and equipment, relationships, slowdowns and brings hidden factors to the surface. It is however part of a natural cycle, and this period is meant to recess, redo and reconsider plans and situations in our lives.

Expect delays, changes of plans and try and not have situations set in stone.  In other words, prepare to be flexible.  Mercury retrograde is often a frustrating time to be looking for a job.  Don’t give up though, just keep plugging on and stay on top of all communication. And make sure you are direct and to the point in your communication with others.  If you don’t understand what someone is telling you, by all means ask for clarification.

It is important to understand this process is nothing to fear although it can be maddening.  No is the time to re-access and re-do, not start or buy new things.  This is a natural cycle and more can be gained by going with the flow of it, than by fighting it.
As Mercury is in Capricorn we will be concerned with the basics: business, security, work, home and family, money.

DO
-reconnect with those from the past
-Plan and re-access
-reconsider investments, job situations and moves, or anything else
-Clean out closets or anything else
-reconsider alternatives
The time for action will come soon enough after January 8. Then will be the time to put well thought plans into action.

Happy Holidays!
Posted by Leslie Hale at 7:54 AM