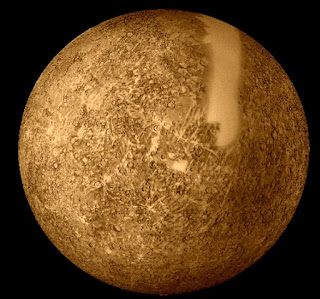 Mercury turns retrograde April 9, at 4 degrees of Taurus. The ruling planet of Taurus is Venus, the planet of love and money.

The next three weeks may be a period where things seem at a standstill, especially our outward action. On an inner level however, we can accomplish a great deal. Venus, Saturn, Jupiter and soon Pluto will also retrograde.

The first step is to know what retrograde Mercury means. In the strictest sense of the word, the planet of communication does not actually go backward, it only appears to. This will occur three or four times every year.  A planet is described as retrograde when it appears to be moving backwards through the zodiac, and this is referred to as apparent retrograde motion.  When planets retrograde, their effects on humans are different than when in direct motion. Thinking is deeper, situations often appear to go underground for a time, or change altogether, and sometimes our focus shifts. Mercury retrograde is the most talked about retrograde, because it is a fast moving planet that controls our thinking, speech, travel, and cognitive skills. When Mercury retrogrades, there are several phases.
The first phase is the pre-retrograde shadow period which began March 28. This period is where Mercurial energy starts to shift and it is time to start wrapping up new projects for the time being and focusing on what is at hand.

Mercury continues to retrograde through May 3 when it turns stationary direct May 3-8. This is the second period when glitches, breakdowns and changes in direction may well occur.

Mercury begins to move forward again on May 9, but remains in the shadow direct phase until May 21, 2017.  Mercurial energy does not pick up its normal pace until completion of the second shadow period. So, the retrograde Mercury period is actually a much longer cycle than most people understand. Changes will occur at the juncture of each retrograde phase.

The third and perhaps most important step in surviving retrograde Mercury is to know what to avoid. Don’t get married, start a new business, start new projects or begin anything you hope will become permanent during the most important three week phase of the retrograde. Don’t purchase high ticket items, important Christmas gifts, paint, or anything you expect to be there for a long time if you can avoid it. Retrograde Mercury is not the time to start new projects, but rather finish up the old, and redo, re-organize or re-work. Go against this advice and you may wish you hadn’t. I chose the paint color in my office on retrograde Mercury just to test it, and as I write this post, I wish I had time to get out a paintbrush today.

All in all, retrograde Mercury is a period where we should reflect on our current state, and plan rather than initiate new ventures. Reconsider your options, re-write, re-organize, and re-think. If you follow these basic principles, I can’t guarantee you won’t experience frustration, but you will survive the retrograde and perhaps come out of it better than you had believed possible.