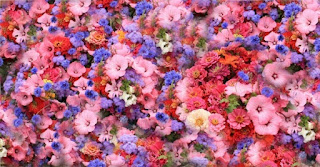 Spring is here, and the month of May will have fewer stressful aspects than April, although there are a few. Mercury turns direct and this alone is a positive change for many. The pace will pick up and the weather will get hotter as the Sun enters Gemini. Here's wishing you a Happy and magical Spring!

The most significant transit for May occurs when Retrograde Saturn trines Uranus, exact May 19, at 26 degrees of Sagittarius/Aries. This transit however, will have an influence in the weeks before and after the transit becomes exact. The closer it is, the more powerful. The further away it moves the less energy it has.

This transit is beneficial for combining the old with the new, successfully. This trine occurred for the first time last December and it will return for the third and final pass in November 2017 when Saturn is direct.

This transit can mean a practical application of inspirational and creative ideas you may have held for a while, and is favorable for mental, scientific and philosophical pursuits. Some may connect with worthwhile organizations or established people.

There could be an interest in reforming or regenerating existing institutions and it is considered favorable for corporate business, joint finances and making professional changes. This is not so much about the new and unknown, but rather combining what is known or exists already with the new, or new ways of doing things. Some people may return to an old job, old love, old friends or other things from the past, but with a twist of the new!

In every way this is a positive transit and I would suggest making use of this energy. Many things you have been working on can come together at this time as they always do when the outer planets make powerful connections like this one.

The last several weeks of April were difficult for many as Venus squared Saturn, after turning direct on April 15. The square to Saturn however, had the effect of seeming to prolong the retrograde and some relationships/situations ended. Venus entered Aries on April 28, where it will remain throughout May and for the third month this year. Venus was in Aries from February 4-April 3, and moved slowly because of this year's retrograde.  Venus in Aries is not as soft as Venus in Pisces and love energy can be more ardent. Venus will leave its shadow retrograde period and return to normal on May 19.

Venus in Aries is especially positive for Aries and the fire signs. If you are born with a Sagittarius ascendant, it can be a good time to meet someone special as it will transit your fifth house.

Mercury will reverse direction and be in its stationary direct period May 3-8. The stationary period is where energy shifts, and things can change again. Sometimes this is a period filled with glitches, but at least we may begin to move forward-just don't jump the gun and move forward too quickly.

As Mercury is conjunct Uranus for an extended period of time, we must use caution in many things, such as communication (this includes email), rash thinking, sloppy thinking, and not thinking things through or jumping to conclusions. We may hear unexpected news, and it's important to use the utmost caution while driving, as many people will not be paying attention. Some people may have an attitude of 'shoot first, ask questions later.' This would be a mistake.

Transits  like this always bring unexpected news in the world and to the collective as well. Look for unexpected situations to occur on the world stage. Mercury-Uranus can deal with unpredictable/unstable and explosive situations, much changeable debate, weather, accidents, and Uranus typically rules coups and freedom as well as aircraft.

Other transits in May:
May 3, the Sun sextiles Neptune-Compassion and creativity are the theme of this transit.
May 9, the Sun trines Pluto. This can be a good and powerful day for accomplishment and working with groups.

Powerful full Moon in Scorpio
May 10, the Full Moon occurs, falling at 20 degrees of Scorpio at 5:42 PM, EST. This is likely to be an intense full moon, bringing a lack of clarity on some issues as well as the potential for unexpected news.

As the full Moon always opposes the Sun, things can get overly emotional. There is a reason medical professionals talk about emergency rooms being full on full moons!

Scorpio is the most secretive of signs and rules the eighth house of money, taxes and debt, other people's money, sex and death and transformation. Some things will change, ready or not.

Saturn is still square Chiron, so many are still trying to deal with and heal old wounds that may come back up at this time with such an intense Moon.

With Mercury conjunct Uranus we may hear unexpected news at this time, or take unexpected actions, or people we are involved with could. But Mercury trines Saturn and this gives us some level of stability, and stable thinking.

Mars is square Neptune at 13 degrees of Gemini/Pisces May 10-11. This is an overall negative, tiring and depressing transit. Gemini rules the third house of communication ( also immediate family and neighbors) and Pisces rules the 12th house of things secret and hidden.  Unknown information, secrets and situations you were not aware of can be revealed at this time.

Overall, there may be a lack of clarity, deception or even self deception. Those inclined to over indulge in alcohol or other substances may do so.

Don't jump to conclusions  and at the same time don't ignore circumstances that seem troubling. There will be more clarity in the few days after this moon when Mars moves away from Neptune.
This transit will play out in the world and in the collective and we may be concerned over issues that relate to money, taxes and debt.

Believe only half of what you hear and question this. If major programs/new starts are implemented with this transit they will be unclear or not what they appear at all.

The highest use of this energy is creative or spiritual matters such as helping someone less fortunate. Compassion can be shown or received.

May 12, Mars trines Jupiter-This is expansive and positive for money matters, business and many other situations.
May 16, Mercury enters Taurus for the second time this year. Thinking and communication may e slower and more thoughtful at the same time. Once a decision is reached it may be final.
May 19, Venus opposes Jupiter-This is generally considered positive but not always. Good for a Friday afternoon as you may not feel like work and it can certainly show over indulgence and lack of discipline. Sometimes it relates to cravings for sweets fattening foods and anything else that can be indulged in. It can also relate to dealing with people who have false values.
May 20, the Sun enters Gemini, the mutable sign of spring where weather starts to change into summer.

May 25, the New Moon falls at 5 degrees of Gemini, peaking in the early part of the morning.

Gemini rules the third house of communication which may be important.

Venus squares Pluto and this is an obsessive transit, prone to suspicion, hurt feelings and obsessive feelings and conversations. Issues could crop up around relationships, money, sex or other social matters. as it is not limited to romantic relationships although this is where it may well play out.
Be careful in the way you approach others as this can be associated with a lack of consideration for others or you could feel you have been treated this way. Jealousy could raise its ugly head, you there could be attempts to remake others. Emotional connections can be shattered and extreme anger can occur in some circumstances. This is not the day to push an issue.

This transit will play out in the world in terms of negative news concerning women, money, and power struggles. We could hear of scandals, domestic abuse/violence, and those who try and push their will and ideas on others.

May 28, Mercury sextiles Neptune-Creativity, intuition and dreams may be highlighted today. You may feel more in tune with others, and this can be expressed through compassion and creativity in many forms.
May 29, Mars opposes Saturn-This is an angry and frustrating transit. Push and others may push back. Not a good day for important meetings. You could feel repressed and held back in some way. A good day to work alone, and there will be a lot of anger floating in the world. Things and people can reach a breaking point. As always this will play out in the collective, and typically involves police or the military. This is a dangerous few days in the world.
May 30, Mars sextiles Uranus-A much better day, especially to try new ideas and situations. It can lead to inspiration in action and ideas. A certain excitement may be felt by some.
May 31, Mercury trines Pluto-This is a day for broad based and deep thinking and you should be able to express yourself succinctly.