Terror attacks in Brussels: the astrology 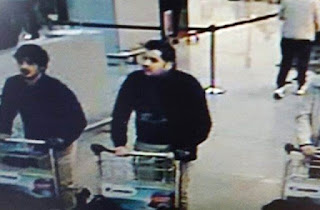 
"Three explosions, including at least one suicide bombing, shook Brussels during the morning rush hour Tuesday, injuring nearly 200 people and killing at least 30.
"We dreaded an attack, and it has come," Belgium's prime minister, Charles Michel, said at a news conference, adding that there were "many killed, many injured"

The death toll from both attacks combined is at least 30, according to Belgian authorities, and is continuing to rise, with reports of nearly 200 people injured."--Vox

Looking at the chart for 8:00 AM, Brussels, Belgium, the ascendant is Taurus, and Taurus's ruler Venus is approaching a square to Saturn which lies in the 8th house of death.

Three planets lie in the 12th house of things secret and hidden and those considered subversives-Uranus, The Sun and Mercury, at 2/0 degrees of Aries. Aries ruler Mars lies in the 7th house of open or known  enemies. Sun-Mercury transits are aggressive, angry and can concern  situations that involve travel.

Jupiter squares Saturn from the 6th to 8th house of death and Jupiter rules religion, or that which cloaks itself under this disguise. The Moon is conjunct Jupiter showing young foreign males, and the Moon trines powerful Pluto in the 9th house showing a foreign connection. ISIS has since claimed responsibility for the attacks.

The attack occurs on the eve of a powerful eclipse in Libra which opposes Mercury, which rules young people and travel. Two explosions occurred at the airport and the subway station.

The last eclipse on March 9, clearly showed that we should have concern over religious extremists, and the possibility of such an attack, and I wrote " Then, there are those who cloak themselves in religious disguises. These are the fundamental extremists who commit murder in the name of their religion, and I fear we will hear news again of atrocities or threats."

The attack appears to be a result of the capture of terrorist ringleader Salah Abdeslam who was connected with the Paris attacks last year.

As Saturn squares Jupiter this week, and several more times this year, look for terrorist alerts to be on high around the world, and military and police forces to clamp down on suspicious activities.  In some respects our very freedoms are being threatened, and personal freedoms around the world may suffer as a direct result.