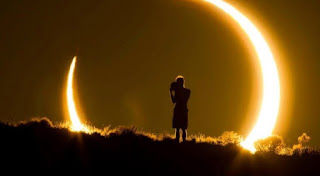 The year's first solar eclipse occurs at 19 degrees of Pisces, March 8, (in US) peaking at 8:54 PM, CST. To see the eclipse path view NASA's website.

Eclipses are powerful astrological events and often reveal things previously unknown or we change course in some way. Typically endings occur on lunar eclipses and new beginnings on solar eclipses but it can the other way around.

While an eclipse hitting a sensitive point in your chart can bring negative situations to light, eclipses can also bring positive change. An eclipse is like a light post in the dark, showing us the way, and the path of what it's to come. The energy of an eclipse can go for months, and in some cases years to come, revealing what our focus will be not only during the eclipse but over a longer period of time. An eclipse is a wild card in many respects and can usher in dramatic events. Some things end and new things begin. An eclipse can bring an unexpected event, or things outside your personal control that can coincide in a new direction. A solar eclipse is like a new moon on steroids. The energy of an eclipse begins at least 30 days before the eclipse occurs, amping up in the days before the eclipse occurs.

This Moon is also considered a Supermoon, the first of 6 this year making it even more powerful. A Supermoon occurs when the moon reaches its closest point to earth in orbit, about 225,000 miles from Earth, making it look larger and brighter. Astrologer Richard Noelle coined the phrase 'Supermoon,' and wrote, "Supermoons are noteworthy for their close association with extreme tidal forces working in what astrologers of old used to call the sublunary world: the atmosphere, crust and oceans of our home planet - including ourselves, of course. From extreme coastal tides to severe storms to powerful earthquakes and volcanic eruptions, the entire natural world surges and spasms under the sway of the SuperMoon alignment - within three days either way of the exact syzygy, as a general rule. SuperMoon solar eclipses tend to have a wider sphere of impact, extending roughly a week before and after the actual event. And other lunar extremes can extend the geocosmic stress window by a day or two here and there in any case."

A solar eclipse occurred at this degree on March 9, 1997. If you can remember what was going on in your life around this time, you may get an idea of the types of things this eclipse can bring.

This (total) solar eclipse is in Pisces, the natural ruler of things secret and hidden, and in the sign ruling the 12th house. We may be concerned with things in our subconscious mind, things secret and hidden, and the realm of the unknown. As the eclipse in the sign of Pisces we look to the things Pisces rules: the spiritual side of life, religion, spirituality and compassion, psychics, creativity and the subconscious mind. Pisces (and Neptune) also rule drugs, water, especially salt water and the seas, the seamy side of life as well as the art and cinema and many other realms. Neptune rules what is buried in our unconscious mind and illusion, delusion, confusion and lies. Heavy Neptune transits often cause us to confuse the issue, or interpret it in an incorrect way.

Clarity of thinking is most important at this time. Now is not the time to ignore issues or sweep them under the rug, nor is it the time to go down a path of negative or depressed thinking that will stand in our way of accomplishment.

Neptune is prone to sacrifice and self sacrifice or even martyrdom. Sometimes sacrifice can be called for, but make sure the cause is worthy, and you are clear in your idea or concept before you automatically sacrifice yourself or your time for an idea, or more to the point, someone else and their goals and ambitions. Will the sacrifice serve you well in the end, or is it a useless sacrifice for someone who doesn't appreciate what you are doing? Don't let anyone have the control to play God in your life or determine your own course, either knowingly or unknowingly.

This Moon is conjunct the Sun and both oppose Jupiter. Jupiter rules religion, or that which poses as religion in the world. Some may have a true spiritual or religious awakening that transcends the rational mind. Dreams may be vivid, epiphanies can emerge out of nowhere, and spiritual and emotional healing can occur. We could explore the concept of divinity itself.

On the other end of this spectrum, the world is full of things, situations and people that cloak themselves under the guise of religion and especially in this election year in the US. Discernment is called for at this time.

With an opposition to Jupiter things may be blown out of proportion or appear bigger than life. Moving through Virgo, Jupiter can increase ambition, overt criticism, organization, analysis, audits and moral causes. This transit can indicate issues with financial markets and money so take nothing for granted as you could regret it later. Watch overspending on things you don't really need!
Narcissism can be rampant among certain types and so can the lies they tell. Charity can be given, only to be thrown back in the givers face. Ego's can be overblown and huge and the term 'blowhard' really comes to mind here. Others (or yourself) may appear as a drama Queen or King.

The moon conjunct Neptune and this is an ethereal if not haunting type of energy. Now is the time for big dreams and later you can make sure they are grounded in reality-don't forget this. Spiritual experiences can occur along with the mystical and this is very powerful energy. Moon-Neptune is both psychic and delusional. It is the stuff dreams are made of and your worst nightmare at the same time. It is deep, eternal and impossible to truly understand. It is a deep knowing beyond anything rational.  It can stimulate the imagination and enhance your feeling of a connection with others, and Neptune likes to merge. It can bring up deep emotional reactions, fantasy, memories of past lives, and at times can connect one with hospitals, asylums or institutions (in rare cases.) Moon-Neptune is the thin gossamer veil between this world and other worlds.

Mercury is within a three degree orb of being conjunct Neptune and will be exact March 11. This further amps up the psychic energy (or delusional/depressing/compassionate) of this transit. While this is a great time for creative individuals once again clarity is needed in thinking. Mercury-Neptune transits can reveal delusions, lies and deception.

This Moon squares Saturn, and this eclipse will set off the Saturn-Neptune square that will dominate the sky this year. Saturn-Moon transits can deal with depression, responsibilities, revelations, the past and Saturn is the planet of karma.  Responsibilities and limitations may seem paramount at this time.
There is very much a Jupiter-Neptune theme to this eclipse. If you can use discernment in your thought, reach for the stars. If you can't do this remember that all things may not be as they appear. Jupiter-Neptune transits coincide with religion (or even the breakdown of religion) and philosophy, creativity, psychics and the metaphysical and otherworldly ties and events, as well as misjudgment, misdirection , faulty thinking and deception that can be intentional or unintentional.

Epilog
This is an unusual eclipse in Pisces as it rules the hidden, unknown, and things that are not normally seen to include the spiritual realm, compassion, the spirit world, creativity and that which is locked away in your own subconscious. This is a time for getting in touch with what lies in your own deeper mind. This is the positive side to this energy and I have written about the negative side which would also include drugs, addictions, compulsive action and delusions about things, situations and people. The effects of this eclipse could see like a waking dream to some. With Saturn in the mix we may too busy fulfilling responsibilities to enjoy the time as we would like. Healing and deeper understandings are possible as are misunderstandings, revelations and change of all types. It all depends on where this eclipse falls in your personal chart. It will be unique to each individual.

World Events
This eclipse will play out in the world as well. Women may come into focus one way or another, either in politics or some other way. We could hear news of a 'power couple'. Looking at the eclipse chart for Washington, DC we see 5 planets in Pisces in the house that rules young people as well as children and entertainment. As Mercury, Neptune the Sun and Moon all oppose Jupiter we could hear of issues related to politics, the law (issues of concern among young people) and entertainment. But, there will be a major focus on young people one way or another.

The fifth house also rules fun, pleasure, love affairs and children. There will be a focus on entertainment and pleasure. This is a time of high creativity and creativity taking solid form whether in terms of entertainment, or new inventions or even medicines.

There is rise for concern for the spread of disease at this time or sickness.

We will hear news about religion or that which poses as religion. As Mars in Scorpio opposes the malefic fixed star Algol the first few days of March it is likely we will hear of terrorist activities like those of the past that will stir the public.

As the 4 planets are in Pisces we can hear news of the Pope or Vatican and/or other religious groups. Once again the question will come up, 'who will help those who can't help themselves.' As Neptune in Pisces shows large groups of disenfranchised people, we must ask who will help the Syrian refugees and others who flee war torn countries. Astrology shows us this problem will not go away soon, but will get worse. We have not seen a flood of refugees like today since the rise of Hitler's Germany. Some will focus on compassion, others fear mongering and blowing facts out of proportion. We could also see real compassion play out in the world at this time.

Then, there are 'those who cloak themselves in religious disguises" These are the fundamental extremists who commit murder in the name of their religion, and I fear we will hear news again of atrocities or threats.

Jupiter rules foreign individuals and countries. There will be news about relations abroad, and foreign concerns. This eclipse squares Mars in the US chart house of 'open enemies,' and opposes Neptune in the ninth house of travel, foreign relations, long distance communication and medicine. People will be angry and situations confused. Lies and confusion may be rampant and there will be news about foreign issues.

Be careful who you believe. Politicians are known for swaying the masses by invoking the word of God, regardless of who their God really is.  Other political-religious factions can come into focus besides terrorist groups. Religious and Philosophical issues and major differences of opinion will arise.
How many wars or atrocities have occurred throughout human existence in the name of God?

At the end of the day your eclipse experience will be unique, depending on what it aspects in your personal chart. Good luck!
Posted by Leslie Hale at 5:42 PM