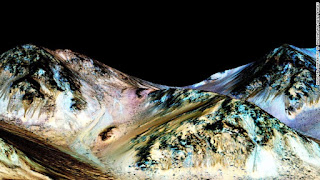 NASA announced on September 28, there is water on Mars, completely changing the past perception of Mars as a desert like planet and fueling theories about the possibility of life on Mars now, in the past or even the future in terms of human colonization.

"Our quest on Mars has been to 'follow the water,' in our search for life in the universe, and now we have convincing science that validates what we've long suspected," said John Grunsfeld, astronaut and associate administrator of NASA's Science Mission Directorate in Washington. "This is a significant development, as it appears to confirm that water -- albeit briny -- is flowing today on the surface of Mars."

NASA announced their discovery September 28, around 11:30 AM, CST.  This announcement came on the heels of a powerful lunaar eclipse in Aries. Eclipses often reveal things and as the Moon was about to conjunct Uranus this was exciting and shocking news. The announcement also came as the Jupiter-Neptune opposition was still within orb. Mars was also opposing the planet of mysteries (Neptune).

These powerful oppositions can stir the imagination and Jupiter is the planet of expansion and religion. Life on Mars could change the way we look at many things including philosophy, religion and certainly our world view. Saturn had just entered Sagittarius the most expansive of signs and the planetary ruler of the 9th house of travel, learning and the way we view the world, all which has the potential for  massive change if life is ever proven to exist on the Red Planet. It will be interesting to see if NASA makes future discoveries during this Saturn cycle.

Looking at NASA's natal chart (7-29-58 09:36 PM, time questionable) the announcement of water on Mars came as Uranus trined Saturn in the 10th house of achievement, business and reputation. This shows up as a major and exciting accomplishment.

As Saturn has entered Sagittarius, it is trine NASA's Sun in the 6th house of work followed by Uranus at 11 degrees of Leo, and things should go well in terms of accomplishment. The eclipse in Aries also trined NASA's Sun in its natal chart. (Agencies like companies have natal charts) I think the scientists are working hard and this discovery marks a transformation in the quest to get to Mars.

According to Wikipedia human flight to Mars is anticipated by 2035, but there will be preliminary travel before then. Private companies have joined in on the race to Mars and one Netherlands company claims to have a flight scheduled there by 2023.

Looking at the chart for NASA's most spectacular achievement-the Moon landing, July 20, 1969-Uranus and Jupiter were both at 0 degrees of Libra, along with the 8 degree Moon, falling in NASA's 7th house. This stellium of planets sextiled NASA's Sun in the 6th house of work.

Jupiter and Uranus are rarely conjunct and this transit would show an exuberant event connected with travel and aircraft or spacecraft (Uranus and Jupiter rule travel, expansion and spacecraft).

Jupiter and Uranus will be conjunct in Taurus again in April of 2024, and in Cancer in 2038.

Will man finally get to Mars, and will we find life? We are in interesting times. What do you think?
Posted by Leslie Hale at 12:10 PM