10 dead at college shooting in Oregon: the astrology 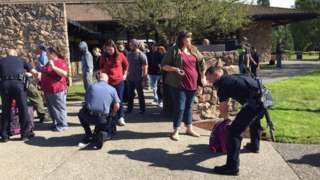 Apparently, 10 are dead, and the numbers keep fluctuating at the time of this post, at Umpqua College in Roseburg, Oregon. At least 20 are injured some critical, according to news reports due to a mass shooting at the college.

The gunman, an unidentified 20 year old, has been pronounced dead, and according to reports he spent the previous night talking online about his plans.
The first call came into police at 10:30 AM, and this gives us the chart for the shooting.

The ascendant is 15 degrees of Scorpio, ruler of the 8th house of death. Scorpio's ruler Mars is in an opposition to Neptune at 4-7 degrees of Virgo/Pisces. This shows a confused and angry male with a gun, or an individual on drugs or alcohol.

Jupiter lies next to Mars and Jupiter rules education, showing us the place of the incident.

Venus was square the Moon, showing us the shooter could have problems in his romantic or social life.

Mars and Jupiter are actually part of a mutable T-square involving Mars, Saturn and Neptune. T-squares are difficult and involve the energy of all three planets. Mars signifies males, guns, police and military action, Saturn rules our structure and Neptune delusion, drugs, religion and ideology. This T-square will continue well into the following week and we are likely to see other unsettling incidents.

We are also dealing with a Cardinal T-square involving Mercury and the Sun (young people), Pluto and Uranus.  The Sun has begun its square to Pluto which is a difficult transit and it typically plays out as those who wish to force their will upon others: in other words, bullies.

The Moon fell at 28 degrees of Taurus and a few hours earlier was conjunct the fixed star Algol. Algol is associated with death, and 'loosing ones head.'

My condolences, thoughts and prayers to the victims and victims' families and friends of this tragic event that will alter so many lives.