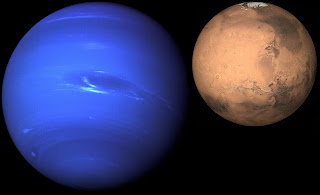 Mars is building in its square to Neptune all week, and becomes exact in the early morning of February 17, making this transit part of the eclipse energies.

Mars square Neptune can be tiring and discouraging. Neptune rules things that are secret and hidden, and as Mars makes contact, things can be revealed that were previously unknown.

We may become aware of inner tensions at this time that can become overwhelming if we allow ourselves to become overly susceptible to this energy.

Neptune is escapist, dreamy, spiritual and creative, and Mars is action oriented. There is a clash between these two energies as Neptune is ego-less and Mars can often rule the ego.

This aspect is susceptible to drugs and alcohol and those tendencies may manifest themselves if they are present in an individual. Drug or food allergies can manifest, and it is sensitive to chemicals of all types.

This transit is prone to uncovering secrets, scandals, and Neptune is the planet of illusion, confusion, delusion and lack of clarity. This includes self delusion as well as being deluded by other people, of just lack of clarity regarding the issues.

This is not the week to take everyone at their word or face value, sign contracts or be involved in serious money transactions. Even at its best, there can be confusion over communication. What is left unsaid can often become the source of the problem.

This transit can lend itself to spirituality and creativity, and this may be the best focus during this transit.

It is important not to allow our minds to be consumed with thoughts that are not grounded in reality.

It is important to keep ourselves grounded in reality at this time, and protect your own mind and thoughts.

Otherwise, in the world, expect scandals to play out, water related weather conditions to be prominent, lies to be uncovered and Mars-Neptune relates to chemicals and chemical weapons.
Posted by Leslie Hale at 3:32 PM